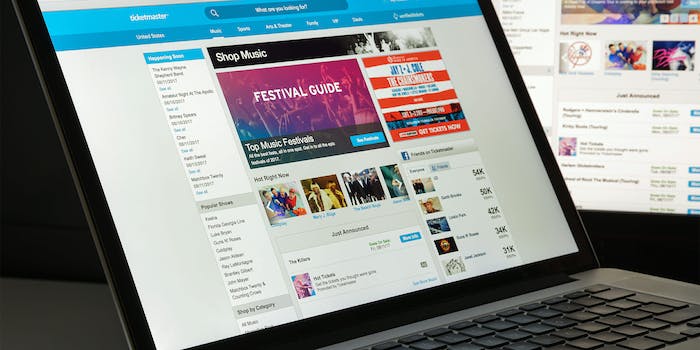 Report: Ticketmaster is working with scalpers to screw you over

This is very, very sketchy.

At a Las Vegas convention called Ticket Summit, undercover reporters posing as scalpers learned that Ticketmaster offers proprietary software scalpers can use to resell thousands of tickets and net Ticketmaster extra sales revenue. With the program Trade Desk, scalpers can link their Ticketmaster account with their own online sales business, reselling purchased tickets on sites such as StubHub and even Ticketmaster itself. And when scalped tickets are resold on Ticketmaster, the company earns another round of commission on that purchase.

This is, technically, against the company’s own policies. Ticketmaster limits sales to six to eight tickets per person and prohibits individuals from purchasing more than that amount in its terms of service. It also prohibits using “automated software or computer system to search for, reserve, buy or otherwise obtain tickets.”

“I have brokers that have literally a couple of hundred accounts,” a Ticketmaster sales representative told the reporters.

If you’ve ever wondered how it’s possible tickets for a show can sell out so quickly, or.how verified resellers can justify selling their tickets for higher prices, this may be the answer. Ticketmaster’s Trade Desk software was reportedly only developed within the past year, but it’s unclear how long the company has turned a blind eye to the issue of scalpers on its site while publicly decrying the practice.