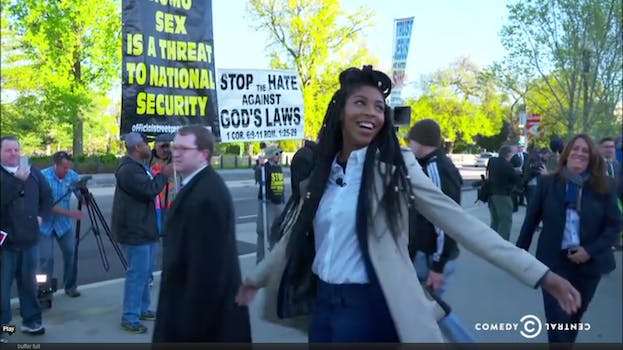 Jessica Williams really is going to miss those 'adorable bigots.'

With every passing year, the campaign against marriage equality becomes more ridiculous and irrelevant. The anti-gay activists protesting outside the Supreme Court as it hears arguments in a major gay-marriage case are the last vestiges of a slowly dying movement. Naturally, The Daily Show found the perfect way of pointing this out.

Correspondent Jessica Williams visited some of the protesters as they marched around outside the Court. Williams passed around a yearbook commemorating the “Hate Class of 2015,” the remaining community of hardcore bigots who will be left without a hobby after gay marriage is eventually legalized. What will they do with their free time when there are no anti-equality rallies to attend?

“I’m so going to miss this,” Williams said tearfully. “This is the last time I’ll be able to hang out with these adorable bigots. Can you hold me? No? Is it a little too gay?”

We sympathize, Jessica. But we’re sure another embarrassingly dated movement will rear its head soon enough.