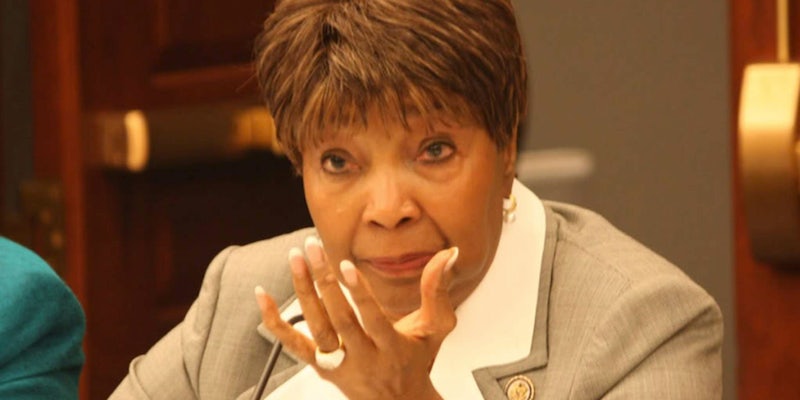 Someone keeps erasing this Texas political scandal from Wikipedia

Attempts to scrub away a scandal from a Texas congresswoman's Wikipedia page have only served to place the controversy back in the headlines.

Attempts to scrub away a scandal from a Texas congresswoman’s Wikipedia page have only served to place the controversy back in the headlines.

The Dallas Morning News reports that an anonymous Wikipedia user has tried twice within the last year to remove a section from the Wikipedia entry for Rep. Eddie Bernice Johnson regarding the congresswoman’s mishandling of Congressional Black Caucus scholarship funds several years ago. The Dallas Democrat denies any involvement in the efforts to whitewash the controversy online, but the issue highlights concerns over political objectivity on the world’s largest online encyclopedia.

The deleted entry, which has since been restored, concerned a 2010 scandal in which Johnson was found to have “awarded 23 scholarships over five years to two of her grandsons, two sons of her nephew and the children of her top congressional aide in Dallas.” It was a clear violation of the scholarship fund’s anti-nepotism and residency rules. Johnson eventually repaid the foundation more than $31,000 for the misappropriated scholarships, but has been hammered over the issue by rivals during her two most recent campaigns.

The two-paragraph portion of Johnson’s Wikipedia page devoted to the scandal, was first removed last summer by a user named Boysinclair. He or she took down the scandal section and made several other minor, positive changes to Johnson’s biography. The scholarship scandal was restored to the article by another user in October only to be taken down again by Boysinclair in November.

Boysinclair shares a username with a frequent commenter on The Dallas Morning News site who has made comments in defense of Johnson. The same user also created a page for 1814 Magazine, an art and photography periodical where Johnson’s campaign manager, Michael Thomas, is founder and editor-in-chief.

When contacted by The Morning News, Thomas denied making the changes but referenced “somebody who works” for him. He failed to elaborate on this reference in follow up questions.

The Wikipedia entry on 1814 Magazine was quickly removed last year after it was found to be in violation of Wikipedia rules against advertising.

The Daily Dot made efforts to reach Boysinclair through Wikipedia and through 1814 Magazine, but received no response. The user has also left no comments on any of Wikipedia’s public talk pages, where editorial issues are discussed and dissected. Boysinclair wouldn’t even respond to a direct attack on his editing process from another Wikipedia known as Rklawton.

By removing information about Johnson’s nepotistic scholarship awards, you served only to bring this scandal back to the attention of The Dallas Morning News. If that was your intention, then you succeeded – as the material is now back in the article and Bernice’s name is once again being smeared in Dallas. If it wasn’t your intention, then you really screwed the pooch. At any rate, if you persist in removing content from this encyclopedia, regardless of your motives, your account will be disabled.

Aides for Johnson issued a firm denial of the congresswoman’s involvement in the Wikipedia scrubbing. Former campaign spokesman Eddie Reeves went so far as to call the Morning News investigation a “witch hunt.”

This is far from the first time a member of congress has seen their Wikipedia page turn into a political battleground.

Even after beating GOP incumbent Scott Brown for his Massachusetts senate seat last year, Sen. Elizabeth Warren has been dogged by a scandal that erupted around her fudged claims of Native American ancestry. The battle has continued to play out on her Wikipedia page, where editors have debated the relative importance of the issue.

The politics of Wikipedia even play out on the international stage. A controversy over how to classify a disputed, uninhabited island chain in the East China Sea has rankled Chinese and Japanese officials and led to saber rattling from the Chinese government.

All of these stories have tested one of Wikipedia’s most important rules, the Neutral Point of View (NPOV) doctrine. The detailed policy outlines the ways in which Wikipedia editors are supposed to avoid bias, but as we see in these examples, the policy isn’t always foolproof.

Despite these anecdotal issues, studies have found that Wikipedia’s penchant for political bias is on the wane. A study from Northwestern University found that as Wikipedia and internet infrastructure have become more commonly available, the site has been able to incorporate a more accurate political cross section of society.