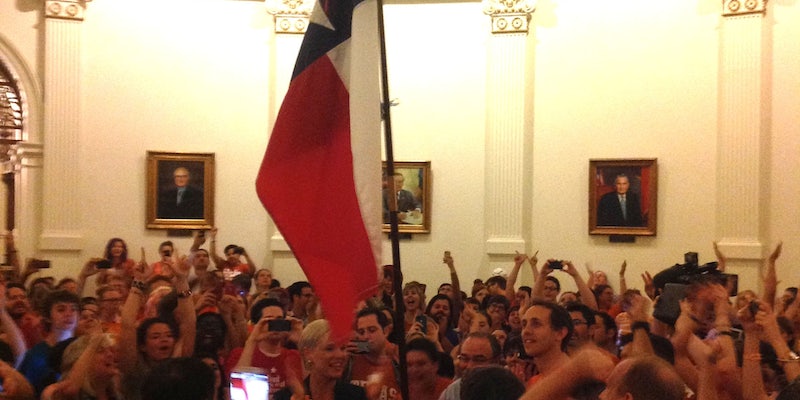 And an official White House petition has already been started to defend Davis's filibuster and question the vote.

In a desperate effort to pass a controversial bill that would shutter abortion clinics in Texas, a slew of Twitter sleuths, including Circa’s Anthony De Rosa and former Reuters social media editor Matthew Keys, discovered that the state legislature altered official state documents to show that the vote was passed before the midnight deadline.

In actuality, the Texas state senate did not pass the bill, SB 5, in time—thanks to defeaning cheers from the gallery from supporters of State Senator Wendy Davis, who spent more than 10 hours filibustering a vote.

“Over 170,000 of us watched the Texas GOP [on YouTube] *Break the Senate rules*, and mainstream media is ignoring that fact,” writer Wil Wheaton tweeted.

De Rosa and Keys tweeted the following screenshots showing how the date of the vote was changed from Wednesday to Tuesday, making it seem as if the Texas State Senate had indeed succeeded in securing an official vote on the bill. This change was noticed on the official Texas Senate SB 5 results page.

An official White House petition has already been started to defend Davis’s filibuster and question the vote. Since the petiton was launched, at about 2am ET, it has already collected more thna 3,500 digital signatures.

“The filibuster was traditional, but effective,” the petition states. “The filibuster pushed the vote passed midnight, yet it was ignored and we watched as a loophole was leveraged and excuses were made. Whatever your belief in Civil Liberties and/or Women Rights, tonight an injustice occurred and I move to petition that the President vetoes tonights passing of SB5.”

The State Senate’s theatrics have turned nearly all of Twitter against it. Since the live YouTube feed of the filibuster shut down around 1:30am ET, the phrase “Texas Senate” has been a U.S. trending topic, with more than 7,000 mentions. Nearly all of them have been negative.

Wikipedia trolls, do yr thing RT @johnathan_coby Senator who chaired the #SB5 vote is getting no love from Wikipedia pic.twitter.com/A9kqkSoQvp

Texas Senate now literally has all the transparency of a closed door. Seriously has anybody found that democracy yet? Check your pockets eh?

As it turns out, those three minutes may have really mattered.