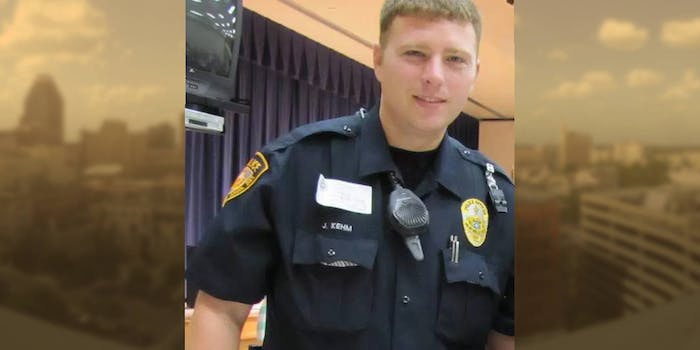 The district is meanwhile investigating the school administration's response.

Texas school officials reached a decision on Monday to fire a San Antonio school police officer caught by a phone camera more than a week ago body-slamming a 12-year-old girl.

Investigations continue, however, into the behavior of Joshua Kehm, a former combat instructor with the U.S. Air Force, who was recorded by middle-schoolers lifting a sixth-grade girl in the air and tossing her face-first onto a brick sidewalk.

“We want to be clear that we will not tolerate this behavior.”

A spokesperson for the Texas Rangers confirmed the law enforcement agency’s involvement by phone Monday. The investigation is in the “preliminary” stage, the official said. “A request was made for our Rangers to assist… and that’s what we’re going to be doing.”

The San Antonio Independent School District requested the Rangers involvement, a school official said, to determine if “there were any violations by the officer that would lead to charges or other consequences.”

Meanwhile, the district will continue “looking into how the school administration responded to the incident.”

SAISD Superintendent Pedro Martinez said in a statement that Kehm, who was placed on paid leave following the incident, was fired because his account was “inconsistent” with the video evidence; the officer’s report was also filed late, violating the department’s “general operating procedures.”

The video, which some viewers may find disturbing, was filmed at Rhodes Middle School and has more than 2.2 million views on YouTube.

“We understand that situations can sometimes escalate to the point of requiring a physical response,” Martinez continued. “We want to be clear that we will not tolerate this behavior.”