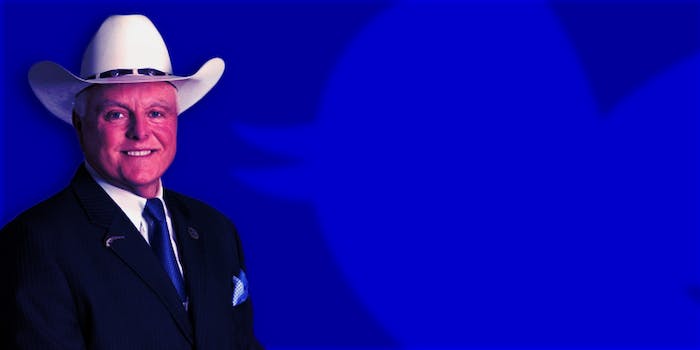 You gotta keep an eye on these commissioners of agriculture.

There are some thoughts better left off social media—especially if you’re an elected official.

But apparently nobody told that to Texas’s Commissioner of Agriculture, who is refusing to take down a Facebook post that indicates the U.S. should attack the Muslim world with a nuclear bomb.

The post, created by a private account and shared to Sid Miller’s wall, shows a photo of an atomic explosion captioned “Japan has been at peace with the U.S. since August 9, 1945. It’s time we made peace with the Muslim world.” It’s a grainy photo, and it is a screengrab from another post, this one created by the curiously named right-wing group Patriots IV Drip 2.

An identical image was reportedly put on Miller’s Facebook page over the weekend was deleted Monday, local ABC News 13 reported, but the newer one was posted late Monday evening and is still visible as of this morning.

Todd Smith, a political consultant for Miller, told ABC News 13 that he didn’t plan to create a “witch hunt” to see how the post ended up on the Texas Commissioner of Agriculture’s page, and referred to it as “a thought-provoking Facebook post.”

Miller has previously shared Sarah Palin’s photo of corporations that allegedly give money to Planned Parenthood, a video that purports to show an “unbelievable hidden message in the first book of the Bible,” and a poster for website called 4Life.org’s “rape conception myth busters” rally.