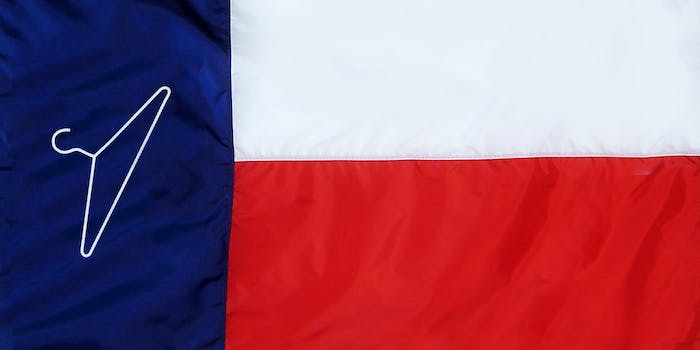 “I will judge you”: Texas Lege has a fiery foe in @VictorianPrude

Sarah Slamen, a 28-year-old activist from Houston, was removed by state troopers while testifying against Senate Bill 1.

Leave it to a Victorian Prude to become an outspoken firebrand in a battle over women’s health.

@VictorianPrude is the Twitter handle of 28-year-old Houston activist Sarah Slamen, a vocal presence against the current Texas abortion bill, online and in person. She was one of many called to testify before the Senate Committee on Health and Human Services Monday night, in a round of special session hearings for Senate Bill 1. Shortly after 11pm, she approached the podium and stated she was in opposition to SB 1, as well as the “Republican primary politics, misogyny, and greed that have dominated the state I was born, raised, and schooled in.”

She starts by thanking the committee, saying it was “destiny” they’d find a way to legislate her uterus. She tells Sen. Donna Campbell, a board-certified ophthalmologist, that she couldn’t trust an eye doctor with her reproductive decisions. She then turns her gaze to the bill’s author, Sen. Glenn Hegar, before committee chair Sen. Jane Nelson promptly gavels her. Slamen keeps speaking anyway: “This is my government, ma’am. I will judge you.” State troopers move in and pull her away from the podium. She continues:

“Everyone on the Internet can see what you’re doing right now. This is a farce.”

“I knew I was going to read the ‘thank you’ section from my original written testimony, but I decided to research each Senator on committee, after hours and hours of watching them purposely distort fetal pain studies,” Slamen explained to the Daily Dot. “And after they allowed anti-choicer after anti-choicer to insult women in general. Participating with their version of ‘decorum’ is really just a way to politely keep their boots on our necks. They made a mockery of honest discourse and I decided to take them to task for it.”

The two-and-a-half-minute clip made Slamen the day’s political hero, gained her more than 1,500 new Twitter followers, and circulated globally. It also expressed what many who’d signed up to testify, as well as those who couldn’t reach the Capitol, wanted to say. She managed to address that in her abbreviated speech: This fight has “radicalized” Texas women and their allies.

And this fight has happened largely on the Internet, from the Texas Tribune livestream of the hearings, which has attracted a more engaged audience, to the crowdsourcing and fact-checking during Wendy Davis’s filibuster. Twitter especially has become a pulse for those looking for updates throughout the day, and Slamen was one of many Texas journalists and activists live-tweeting proceedings. That real-time transparency, coupled with the frustration, dissent, and anger of a growing number, has organized Texans in a new way.

“Texas is a huge state, roughly 800 miles wide by 800 miles long,” Slamen says. “Social media is a physical necessity in that regard. On a nationwide or international scale, social media and livestreaming are key to letting people evade dangerous security state impositions on our rights to free speech. A great example would be the college students who live-tweeted from a NSA recruitment meeting [last week]. Those kids knew they were in a position to disseminate important info but had to do it in a discreet way.”

Slamen adds this has been an especially important time for mobilizing women.

“Women have three to one the social networks of men,” she says. “We have made it our new jobs, sometimes second and third jobs, to be a part of the process that [is] determined to rip our rights away. We are invading their 20th century procedures with 21st century methods of organizing. It has to be noted, however, that the critical mass of human bodies is what is often necessary to finally wrest control from the corrupted who are in power.”