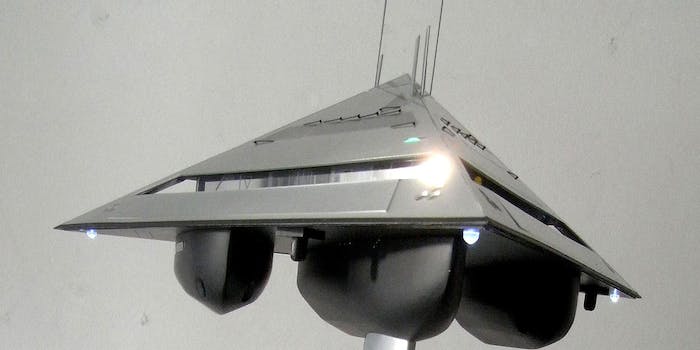 Sure, the Egyptian pyramids are an impressive sight, but they still leave something to be desired. They’re landlocked, after all. Designer Jonathan Schwinge has taken a second draft at the ancient buildings and come up with a version that floats.

The London-based architect has dubbed his creation the Tetrahedron Super Yacht. It’s a reimagining of the standard yacht made possible by some simple geography—a three-dimensional build made up of four triangular faces, six edges, and four corners where the shapes intersect.

Those simple shapes make up the eye-catching design you could ever spot on the open sea. At a distance, it looks almost alien in its build. Up close, it’s excess manifested into a physical form. But it’s an impressive sight regardless. At low speeds, the yacht sits just atop the water on three underbelly hulls. At top speeds, it’s an even more impressive sight; the pyramid is lifted out of the water by rotating hydrofoils and appears as if its levitating above the surface. The effect is created by a hydrofoil small waterplane area ship (HYSWAS) hull—a lone, vertical strut contected to a submerged “torpedo” hull. There is precedence for this hull design—Schwinge points to a hull made by the Maritime Applied Physics Corporation, which created a proof of concept for the HYSWAS system in 1995. Schwinge is now worked with that company to create his concept. While the idea of a levitating ocean pyramid seems so brazenly absurd that one could never expect it to ever get its sea legs, Schwinge argues that his design is as practical as can be. On his site, he wrote, “long distances are achievable with reduced out-of-water drag and stormy ocean conditions would incur virtually no slamming. Improved efficiency is driven by elevated hydrofoil propulsion and would be an inherent performance benefit of this type of design.”