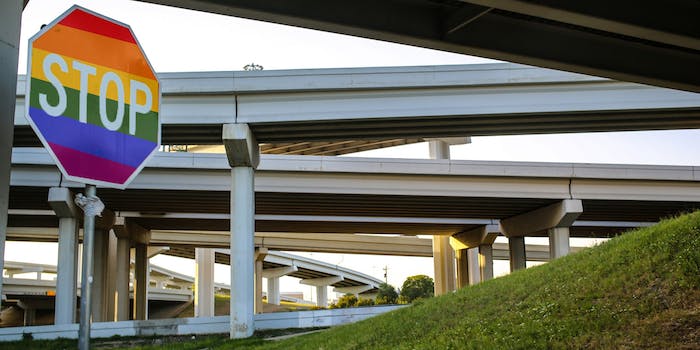 In 29 states it is perfectly legal to ban LGBT people from stores, jobs, and housing

Is it legal to discriminate against a gay or transgender person? It depends where you live.

Jeff Amyx, a hardware store owner in Tennessee’s Grainger County made national news this week when he posted a “no gays allowed” sign in his business’s window. Amyx told reporters that the sign was a reaction to Friday’s Supreme Court ruling that legalized same-sex marriage nationwide, and to the increasing acceptance of LGBT rights and activism.

“They gladly stand for what they believe in, why can’t I? They believe their way is right, I believe it’s wrong. But yet I’m going to take more persecution than them because I’m standing for what I believe in,” Amyx told USA Today.

After some public controversy, Amyx Hardware & Roofing Supplies took down the “no gays” sign and replaced it with one stating that the store reserves the right to refuse service based on freedom of speech and religion.

But while the national news media had a field day over the sign—terming it part of the Christian backlash against the marriage equality ruling—there’s a simple explanation that almost no one has addressed.

What Amyx did was totally legal.

In Tennessee, just as in 28 other U.S. states, it’s perfectly legal to post a “no gays” sign in the window of a store. It’s legal to tell an LGBT person to get out of a public park, to refuse to serve them a meal in a restaurant, to deny them care at a doctor’s office, or to decline to open a bank account for someone because they are gay or transgender. In those states, it’s all 100 percent legal.

Also legal in 28 states: denying housing to LGBT people. A landlord can legally send an eviction notice that says “you have to leave because you’re a lesbian.” A real estate agent can say, “sorry, but I won’t sell this house to a gay couple.” A broker can blatantly tell you there’s no apartments for rent for transgender folks.

Guess what else is well within the legal rights of residents in 28 U.S. states? Firing an employee because they are LGBT—or simply not hiring them. It’s entirely legal to say, “No thanks. You’re qualified, but we just don’t want your kind working here.”

What’s incredible, then, about the Tennessee store owner’s “no gays allowed” sign is not that it happened. It’s that everyone acts surprised that it happened. While celebrations raged around the nation on Friday, and national monuments turned rainbow for a day, the lack of legal protections from discrimination for LGBT went largely unrecognized.

The 1964 Civil Rights Act only extends discrimination protection based on race, color, national origin, sex (meaning women, essentially) or religion. When it became illegal to, for example, create separate drinking fountains marked “white” and “colored,” it never became illegal to tell a trans woman “we don’t serve your kind here” at a bar—which is exactly what happened to Tempe, Arizona’s Briana Sandy this June. Sandy received an apology from the bar’s owner, who shook her hand in front of the news cameras, but bar was still legally within its rights to kick Sandy out. Arizona is one of the 29 states that allow public accommodations discrimination against LGBT people.

Courts that rule corporations can have religious beliefs, as the Supreme Court decided in Hobby Lobby, and states that pass RFRAs (Religious Freedom Restoration Acts), like the legislation Indiana passed earlier this year, reinforce what’s already legal in the majority of U.S. states: sweeping discrimination against LGBT citizens.