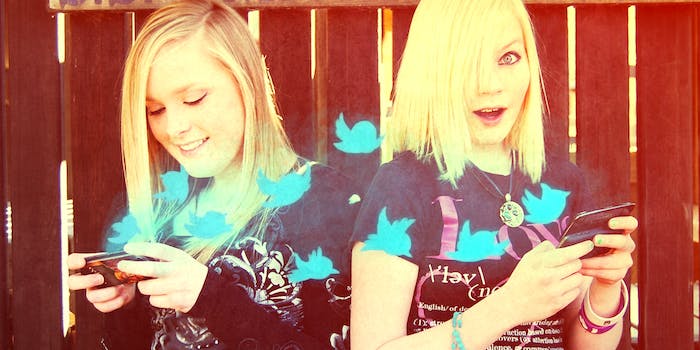 Teens have realized the power of Twitter’s group DMs

Sure, you're having a little fun with the feature. Teens are taking it to the next level.

We can’t stop, won’t stop talking about teens and tech. Maybe it’s because we pine for the days when our lives were as simple as passing notes in class or sitting on the phone three-way calling our friends for hours. Or maybe it’s because teens have a way of using apps in ways we could never imagine, and it stuns us.

Twitter is a teen favorite, though it’s not because they’re using the 140-characters to follow news and information. Rather, they use it to communicate with their favorite celebrities in hopes of getting “noticed.”

Between One Direction, YouTube megastars, and artists I’m still completely unaware of, gunning for attention is happening one tweet at a time.

A follow from a celebrity, or friend of a celebrity, gets you that much closer. Maybe even to the holy grail of Twitter communication: direct message.

Sara, a One Direction fan and teenager from the Bay Area in California who goes by the username “I CAN DM MY SUNSHINE” on Twitter, told me that while group direct messages give you a better chance of “being noticed” by your favorite celebrity, it’s still not as good as a follow back.

“If people already have a follow from someone then they can just send them a solo DM which is probably an easier way to get noticed than in a group DM since there are so many people,” she told me, appropriately via Twitter direct message.

When the direct messaging function first launched, she was added to a number of group direct messages, thanks to the young fans on Twitter that all want to be connected to their favorite star. The groups fill up quickly, and there are a lot of accounts that use the new feature to pick up new followers and retweets.

There are even Twitter accounts exclusively dedicated to helping people get added to group direct messages. 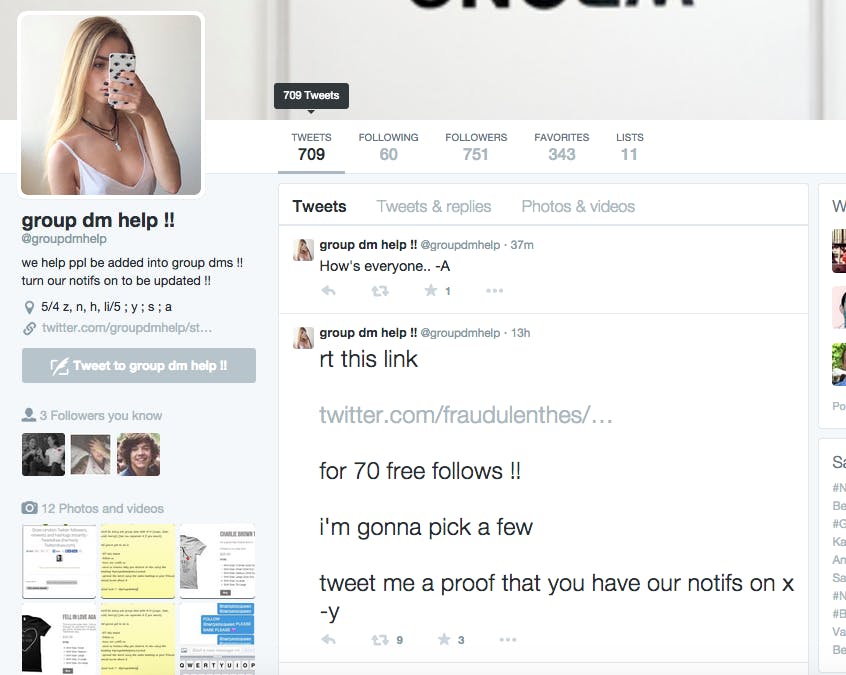 For Sara and other fans on Twitter, “getting noticed” is a major part of its draw. And by that she means having her favorite celebrity—likely one of the artists from One Direction—message her back. It hasn’t happened yet, but with Twitter DMs opening up greater access to the private inboxes of celebrities, it might.

When Twitter first launched group DMs, Sara criticized users who complained about not being added to different groups—but when I asked her if the new feature spurned a bit of jealousy amongst friends, she was noncommittal.

I'll probably get hate for this but whatever pic.twitter.com/0DHpl8QMYr

“I guess [people could be jealous] but usually you can find people to put you in group DMs,” she said.

Lucky for me, Sara was willing to add me to one of her group direct messages. The group messages with One Direction were all filled—understandably so, considering all the fans begging to join. But I was lucky enough to find myself in a group message with Cher Lloyd, pop music artist from the U.K. Lloyd has almost seven million followers. The most participants in the group DM could say amounted to: “OMG I love you Cher!!!!!” 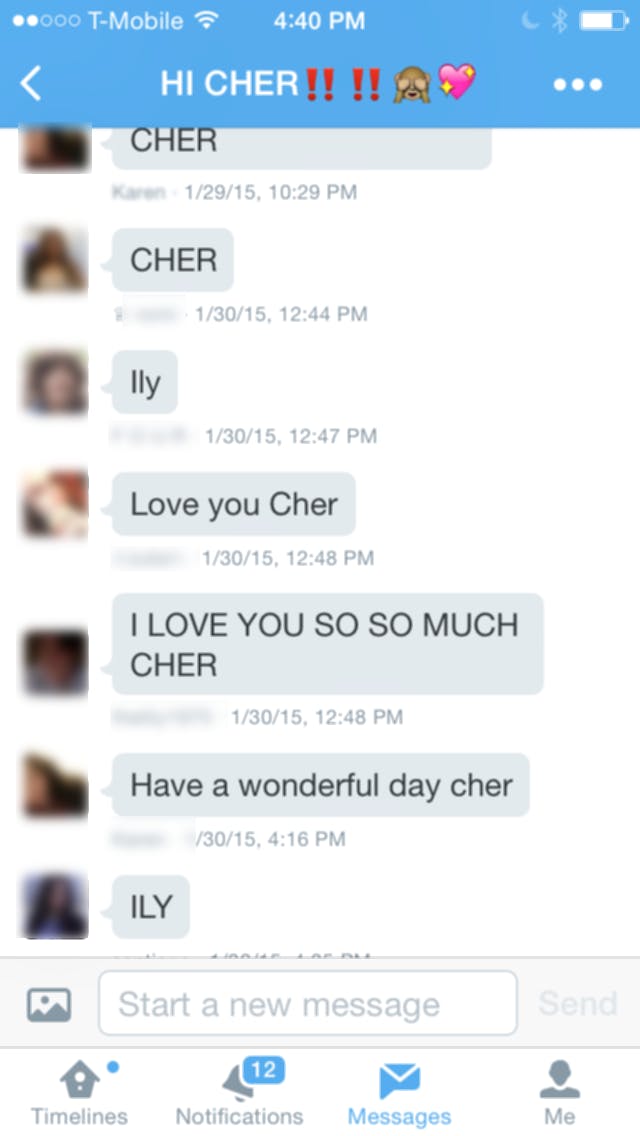 Until, that is, on Friday, when people started talking about where they were from, and the message thread became more of a conversation among friends rather than an expression of love for a pop superstar who would likely never see the messages.

Another teenager told me that direct messages are replacing group texting via SMS, because when friends have different operating systems, like Android and iOS, group messaging can be frustrating. So to Twitter they turn.

Teens aren’t the only ones who are making good use of Twitter group DMs. I’m addicted to the feature after only a couple of weeks: It’s allowed me to chat privately with girlfriends I would otherwise text individually. There’s an ongoing group message with my work colleagues, where we talk about nothing related to the Daily Dot.

But being a part of teen Twitter for a bit made me realize that while group DMs might be fun for the average user, celebrities are likely bombarded with invitations, making their personal Twitter inboxes even more unmanageable.

Some people have already tried to game the system—Mat Honan over at BuzzFeed added Justin Bieber, President Barack Obama, and a handful of celebrities to a group direct message, and discovered the real power therein is annoying all your famous followers.

Anyone can be added to the group direct message, as long as the person inviting them is followed by the account in question. Considering Justin Bieber follows 174,000 people to his 60 million followers, his direct message situation has to be out of control.

For now, I’m in a handful of group chats planning karaoke or girls nights out. But the one I’m most glued to is my chat with Cher Lloyd, where teens from around the world are professing their love for her in a way much-removed from the public Twitter town square.

But that will all change once I can wrangle an invite to a One Direction group chat. Because teens are having way more fun on Twitter than I am. As usual.