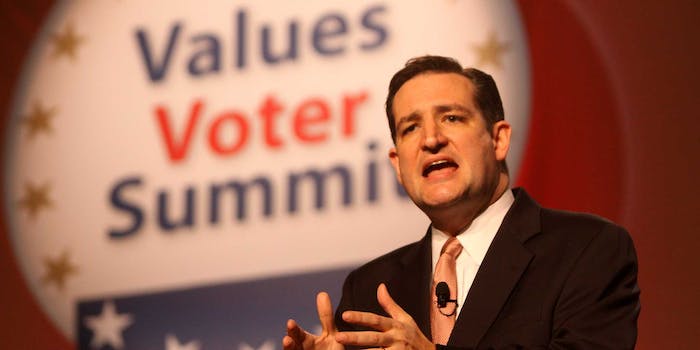 'I made a terrible mistake.'

An outpouring of anger has prompted a gay hotel owner to apologize for hosting an event for Sen. Ted Cruz (R-Texas).

“I am shaken to my bones by the emails, texts, postings and phone calls of the past few days,” Ian Reisner, the co-owner of the Out NYC hotel, wrote on Facebook on Sunday.

“I made a terrible mistake,” Reisner added.

Reisner and his business partner Mati Weiderpass hosted the April 20 “fireside chat” for Cruz, his wife Heidi, and about a dozen other people at their New York City penthouse apartment.

It was at this event that Cruz, according to Reisner, said, “If one of my daughters was gay, I would love them just as much.”

Just days earlier, Cruz had dodged a question from conservative radio host Hugh Hewitt about whether he would attend a family member’s gay wedding if he were ever invited to one.

“I haven’t faced that circumstance,” Cruz said. “I have not had a loved one go to, uh, have a gay wedding.”

A Facebook page calling for people to boycott properties owned by Fire Island Pines, Reisner’s hotel company, received almost 10,000 likes. The New York City Gay Men’s Chorus canceled a fundraiser scheduled to take place at Out NYC, saying, “We made the decision because we want to be 100 percent clear in our support for the LGBTQ community.”

In his Facebook post, Reisner said he had been “ignorant” and “naive” to cohost the April 20 dinner with Cruz.

“I’ve spent the past 24 hours reviewing videos of Cruz’ statements on gay marriage, and I am shocked and angry,” he wrote. “I sincerely apologize for hurting the gay community and so many of our friends, family, allies, customers, and employees.”