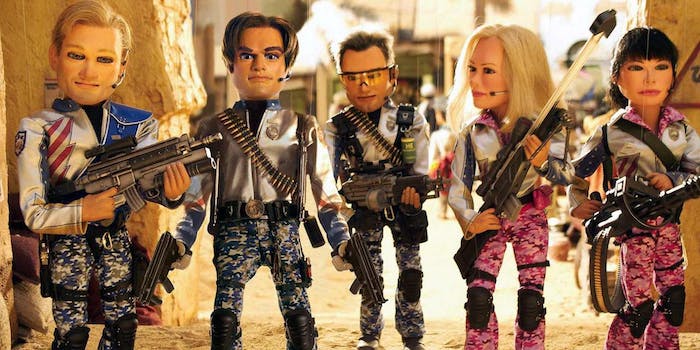 When Sony gave in to the demands of the probably North Korean hackers that threatened 9/11-esque destruction at any movie theaters showing The Interview, scrapping plans to release the flick on Christmas Day, one Texas theater wasn’t having any of it.

Unable to show the controversial Seth Rogen–James Franco comedy, the Texas-based Alamo Drafthouse instead scheduled an impromptu 10-year anniversary screening of Team America: World Police. Trey Parker and Matt Stone’s 2004 action-packed puppet satire that, much like The Interview, featured a dramatized version of North Korea’s head of state as it primary antagonist.

The screening was to be a quote-along where the subtitled dialogue would be displayed on the screen so fans could yell out their favorite lines—a regular occurrence at the Drafthouse’s chain of theaters.

Other theaters across the country that had similar ideas to show Team America in lieu of The Interview also reported getting similar orders to Paramount.

The Verge reports that one cinema in Cleveland, Ohio that Paramount barred from screening Team America had its own 10th-anniversary event in October, well before the attacks on Sony were made public.