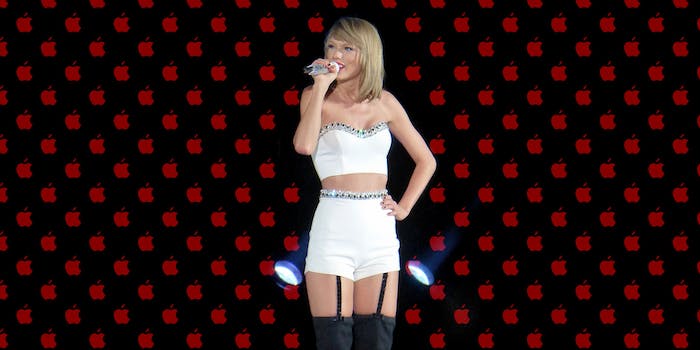 When Taylor Swift has something to say, people tend to listen—including tech behemoths like Apple.

Swift penned an open letter to Apple Sunday, explaining to both her fans and the company why they wouldn’t be seeing 1989 on Apple Music, Apple’s new streaming service launching June 30. She didn’t agree with Apple’s decision not to pay musicians, songwriters, and producers during Apple Music’s three-month free trial period. (Artists would still compensated when consumers started paying $9.99 a month or $14.99 a month for up to six family members.)

While Swift could have survived without the payments, she said she was speaking up for new artists who were afraid to take on Apple. And because of who she is, she got results.

Apple Senior Vice President Eddy Cue announced on Twitter late Sunday night that Apple was abandoning its attempt to get three free months out of artists. It will now pay those artists during the free trial period—and it’s because of Swift’s letter.

Apple will always make sure that artist are paid #iTunes #AppleMusic

#AppleMusic will pay artist for streaming, even during customer’s free trial period

We hear you @taylorswift13 and indie artists. Love, Apple

“When I woke up this morning and saw what Taylor had written, it really solidified that we needed a change,” he told Billboard. “And so that’s why we decide[d] we will now pay artists during the trial period.”

Cue and Apple CEO Tim Cook called Swift, who was on tour in Amsterdam, to tell her about the change. Swift, for her part, was satisfied with the overall outcome, although there’s no word on whether she will allow 1989 to be part of Apple Music now.

Maybe Elvis Costello was onto something here.

@taylorswift13 A word from our future President. Right on. You tell 'em, Girl. E.C.https://t.co/qnNh2WTJiX …

Photo via GabboT/Flickr (CC BY SA 2.0) | Remix by Jason Reed