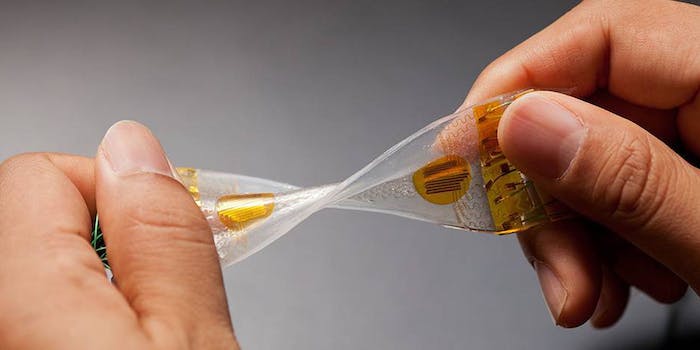 Temporary tattoos could be where the confused wearables market is heading.

When you think of temporary tattoos, you probably picture throwaways pieces of paper with cartoon animals on them. Of the damp washcloths pressed over your arm again and again, trying to make them stick. And then the slow fade while the ink peels off.

These temporary accessories are full of nostalgia and little else, but a push from technology could make it the latest trend in the wearable market.

The Center for Wearable Sensors at the University of California San Diego has been experimenting with attaching sensors to temporary tattoos in order to extract data from the body. The tattoos are worn exactly as a regular temporary tattoo would be worn. The sensors simply sit atop the skin without penetrating it and interact with Bluetooth or other wireless devices with a signal in order to send the data.

Dr. Joseph Wang, director of the center, showcased some of the lab’s work at the TSensors Summit last month, all focused on collecting data from the skin. In addition to the temporary tattoo sensors, other showcased wearable sensors included textiles and devices worn on the finger.

“The skin is an important sensory function. The skin is not only our own body, but it could be the body of any host, like a building, a tree, or moving car,” Wang said at the summit.

But for now, the center is focused on human applications and has gained attention on their work with sweat. A biofuel battery applied as a temporary tattoo converts sweat into energy, and a startup within the center has developed a strip that extracts data from sweat to explain how your body is reacting to certain types of exercise. Amay Bandodkar, a fourth year PhD student at UCSD, explains that the sensors are programmed to react to the amount of lactate the body produces.

Bandodkar, who has been working with Wang and others at the center since 2011, also said that research is underway to produce a temporary tattoo that would measure glucose levels in blood. The wearable would be especially useful for those with diabetes, who have to keep track of their blood sugar levels throughout the day.

The Center consists of multiple groups working toward the goal of one day commercializing temporary tattoo sensors. Bandodkar works on the scientific end but says that there are teams who handle truncating big data, developing software, and conducting population research to understand the factors that influence consumers.

“The whole goal is to develop a technology that was not expensive and not only something that can be used in the first world, but that the third world can use also.”

The Center for Wearable Sensors has already received some funding and has been talking to companies interested in helping them commercialize their products, but Bandodkar did not say when he think UCSD’s innovations will be available for the masses.

By using technologies such as laser printers and screen printers, the tattoos and sensors are printed at just a few cents each, Bandodkar said. The center produces the tattoos to test on a smaller scale, but he said commercializing the products and producing them at a large scale would bring down the cost even more.

The low cost would also address the fleeting nature of the wearables. Bandodkar said that the sweat-sensing tattoos last for only 10-12 hours.

“When we started the project, one of the major criteria for us was cost,” Bandodkar said. “Health care is so expensive, not only in the U.S., but all over the world… the whole goal is to develop a technology that was not expensive and not only something that can be used in the first world, but that the third world can use also.”

Critics complain that wearable devices are invasive technologies that haven’t really achieved the adoption rates they need in order to make them a synonymous part of everyday life. Whether the issue has to do with cost or aesthetics, the companies making temporary tattoos seem to address those problems. With a simple program and at little cost, temporary tattoos can be altered into whatever shape and design a consumer wants without a company having to make sweeping changes to its fleet of products.

But what all these companies face is making their devices important enough that they continue to be useful beyond consumers’ initial period of excitement. As researchers continue to move forward, the appeal of wearables in the form temporary tattoos has already reached beyond the confines of the Center for Wearable Sensors and moved past health applications.

NewDealDesign presented a similar idea in October when Fast Company asked them what wearables might look like beyond the wrist. The company came up with Project Underskin, a digital tattoo implemented onto a user’s hand. It would interact with everything—trade data with a simple handshake, unlock the door, or track blood sugar levels, the company revealed in its presentation.

The company, the design firm behind the Fitbit, sees the hand as not only a part of the body that would allow for optimal functionality of the tattoo, but a facet of our lives that reveals a lot about ourselves and our culture.

“If you high five someone that’s very different than hand-holding, or a closed fist, or an open palm,” Jaeha Yoo, director of experience design for NDD, told Fast Company. “The hand is where a lot of self expression happens.”

“I think the sci-fi genre has tried to create things that are too cold, too mechanical, too scientific, and always failed to create a real true bond with culture,” NDD president Gadi Amit said. “That’s the reason, for instance, we didn’t use the forehead or back of your head, because these are a bit too cyborgish.”

NewDealDesign said that this is the type of technology they could see developing within the next five years and predicts that tattoos will be the next step for the wearable market.

“Seriously,” Amit says, “I could tell you, in the last year, I’ve had discussion with entrepreneurs, probably three to four times, about physically invasive wearables… it’s a reflection on what design will be in a decade or so—not necessarily about the object—but about weaving together biology science, medicine, electronics, a lot of interaction, and cultural wisdom.” 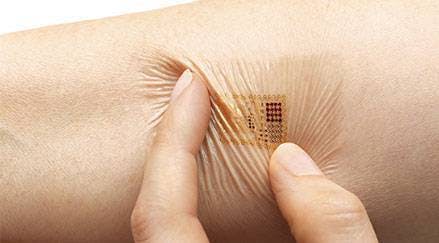 A company called MC10 seems to be bringing that concept to life. MC10 has been developing attachable computers in the form of small stickers that somewhat resemble a Band-Aid. The company specializes in creating technologies that conform to the human body without compromising function or quality. The company teamed up with researchers at the University of Illinois at Urbana-Champaign to develop the same kind of technologies that the Center for Wearable Sensors has been working on and that NewDealDesigns dreamed up.

From the looks of it, it only seems like a matter of time before we switch out our clunky bracelets and glasses for a more discreet alternative.