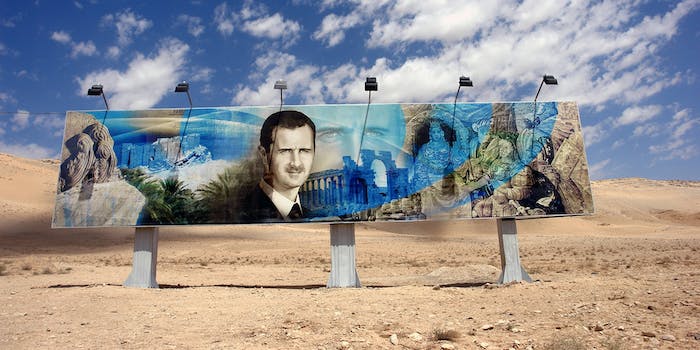 Who’s responsible for this alleged hack on a Syrian government site?

The tables have turned on the Syrian Electronic Army, last seen dismantling the New York Times.

The tables have turned on the Syrian Electronic Army, last seen dismantling the New York Times, the Telegraph, the Onion, and even the Daily Dot. The main Syrian trunk ISP seems to have been compromised by an American hacker or group.

According to France’s tech investigative publication, Reflets.info, the website for the Syrian Telecom Establishment (STE), ste.gov.sy, was redirected temporarily to att.com.

So either AT&T bought the Syrian government’s ISP and someone in the tech department hit the switch on the staging server too soon, or someone hacked it.

But why focus on STE? According to Reflets’ Fabrice Epelboin, “STE is more than a simple ISP in Syria, it’s the mother of all Syrian ISP, all other national ISP depend on it to access the global internet.”

AT&T is one of the American telecoms involved in the NSA’s PRISM program of electronic surveillance.

This could be a move by the American military’s Cyber Command or other intelligence group in anticipation of a U.S. bombing of Syria; it could be an individual hacker like the Jester; it could be a freeballing hacker who just happened to find a vulnerability in the site; it could be a screw-up by Syrian authorities, and it could be a ghost in the machine. It is all just speculation at this point.

But fascinating speculation in the least.

Oh, and STE’s mail is pointed to a server in Iran. Though that, as Reflets notes, is “nothing strange considering Hezbollah’s ties with El Assad’s regime.”