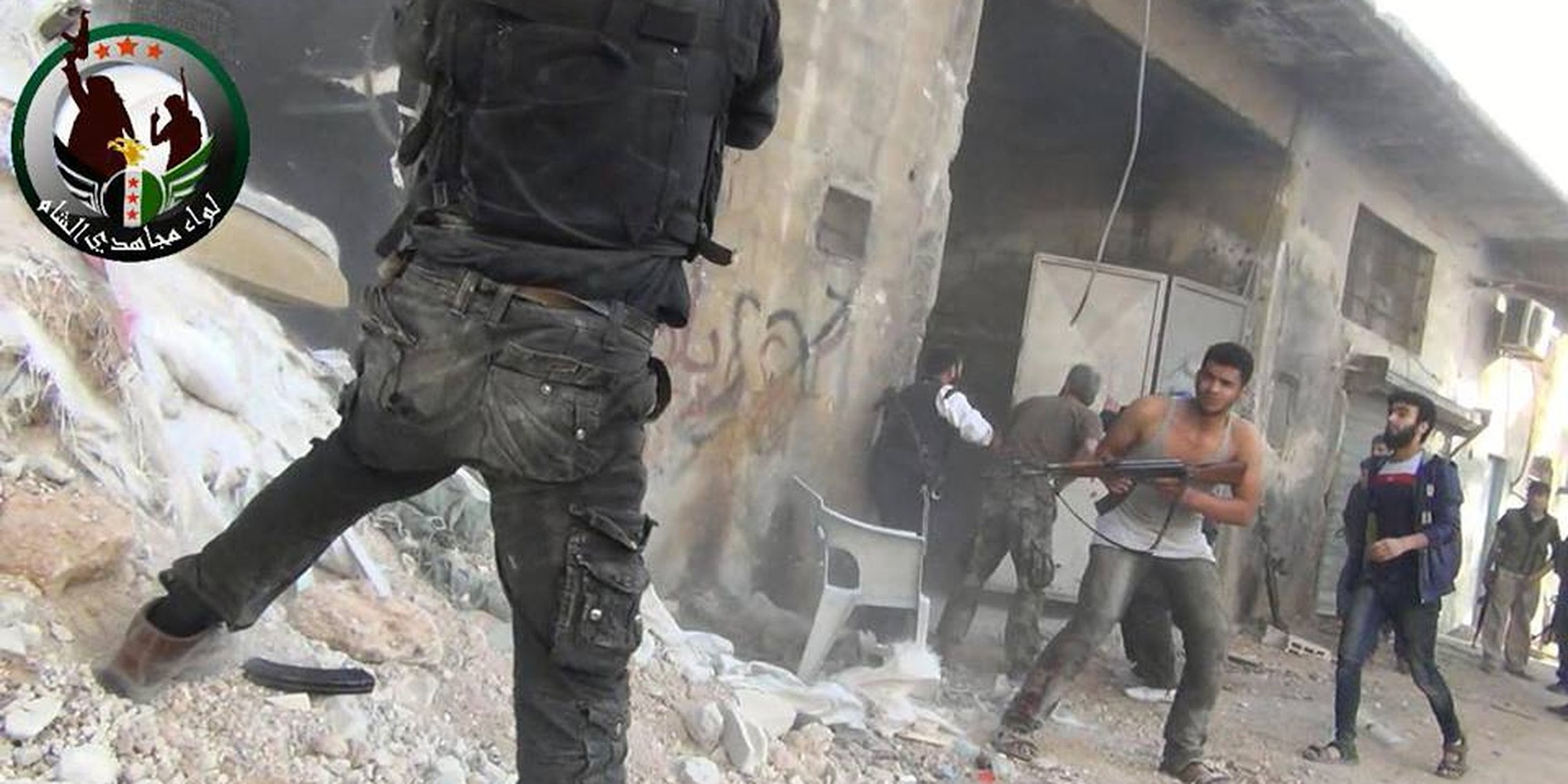 Why the Syrian uprising is the first social media war

This is how we see war in 2013: next to like buttons and view counters.

This is how we see war in 2013: next to like buttons and view counters.

As a battle flared just west of Idlib, a contested city in northwest Syria, a camera was mounted on an old Kalashnikov rifle so the audience would have nearly the exact same perspective that a video game player has in blockbuster first-person shooters like Call of Duty or Counter-Strike.

The sound of gunfire mixes with an army of young men screaming “Allahu Akhbar!” Dozens of armed Syrian rebels sprint across an open field to storm a well-defended government checkpoint. An editor would later alternate between first-person action and a cameraman on a nearby hill filming the battle from a bird’s eye view.

When the rebels won, the video was guaranteed to be a viral hit.

If the Vietnam War was the first television war and the Gulf War was the first 24/7 cable news war, the civil war in Syria could be considered the first social media war. Across YouTube, Facebook, Instagram, Twitter, Flickr, Blogspot, WordPress, forums and chat rooms, hundreds of factions in the dispute are waging propaganda offensives. 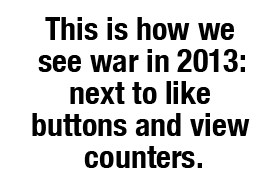 Social media has actually been an important activist’s tool in Syria since at least 2005. That’s when a Facebook group called Comic4Syria started producing anonymous and popular jabs at President Bashar al-Assad’s government. Before the outbreak of violence in March 2011, the comic had 11,000 likes. It’s since doubled.

While the Arab Spring proved again what a powerful and disruptive force social media can be, Syria’s civil war is the first full-blown conflict presented to the world by YouTube and LiveLeak, the video-streaming site known for hosting violent and graphic content that would typically be pulled off of YouTube.

Social media has “become crucial to shaping how the crisis in Syria is portrayed and perceived,” wrote Middle East affairs analyst Chris Zambelis in July 2012. In the last year, the trend has only intensified.

Both the government and rebel groups have dedicated staff managing social media accounts. They’re promoting their brands around the world, raising funds and influencing the international debate.

Even as entire cities in Syria face Internet shutdowns and after more than two million have fled the country, there seems to be no end to the constant stream of combat footage and propaganda from Syria.

Sitting in the top left of the video above is the prominent logo of the Al-Tawhid Brigade, the unit of Syrian rebels responsible for a YouTube channel with 3,000 subscribers, a recently suspended Facebook page with nearly 1,500 likes, and a slick website to deliver civil war videos to the world. Over 14,000 people have watched the Brigade storm that government checkpoint. It’s a highly effective piece of propaganda for the social media-conscious Brigade.

President Bashar al-Assad has used Instagram this year to present a congenial image of the man accused of using chemical weapons—with initial evidence circulating heavily on YouTube—of in the middle of heavily populated areas. Photos of his smiling wife and wounded soldiers are surrounded by angry comment threads accusing Assad of being blessed by God or cursed to hell. Over 40,000 people follow him there, and he’s gained 5,000 followers in each of the last two weeks.

While the loosely affiliated Syrian Electronic Army has taken out one major website after another to protect his name, Assad has similarly used social media to control his message. The official YouTube channel for the presidency of the Syrian Arab Republic posted a May 2013 interview that addressed the conflict and Russian arms deals—with comments disabled.

What’s interesting about the rebels is their use of social media to solicit donations. Hajaj al-Ajmi, a Kuwaiti sheikh, uses his 347,000 Twitter followers to call for funds for the militias. Al-Ajmi’s donation drives have been so effective that the Washington Post wrote that he is a “money machine.” An Eastern Syrian rebel group even named itself the Hajjaj al-Ajmi Pilgrims in tribute to the man behind the powerful Twitter account, according to the Post, a feat confirmed in a YouTube video featuring masked men and assault rifles.

It’s difficult to pin down exactly how much money these social media campaigns successfully bring in. In 2012, the Popular Commission to Support the Syrian People, a Persian Gulf group of online organizers, was publicly thanked by various rebel factions for donations ranging from $10,000 to $600,000. It’s impossible to verify the numbers but “government experts and private analysts” told the Washington Post that these sorts of donations numbered well into the millions of dollars.

This new world of social media allows journalists to present an unflinching look at the war zone. In October 2012, PBS Frontline journalist Olly Lambert was working in the village of al-Bara when two government airstrikes hit 300 meters away from him. He documented the ensuing chaos including rescues, deaths, and the Syrian keen awareness of the camera he held. In the minutes following the airstrikes, Syrians wanted to make sure Lambert filmed exactly what they wanted. 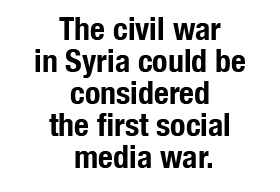 As a Syrian man was being pulled out of the rubble and rushed to a hospital, several rebels kept the ambulance door open and demanded that Lambert film the injured man. Rebels screamed instructions to local women on camera to make sure that they eloquently insulted Assad.

“I’m sure they regarded me as a potential propaganda machine,” he later said. “People would often approach the camera and make speeches or cite ‘facts’ that were not verifiable.”

Over 100 journalists have been killed in Syria since the beginning of the civil war. As such, news institutions are increasingly relying on social media for updates. CNN, for example, recently broke a story about Islamist rebels capturing the Christian town of Maaloula after YouTube videos of the attack were posted online.

In northwest Syria, an entire September 2012 rebel attack on the town of Harem played out on Facebook. The Local Coordination Committees posted a Google Maps image marking government troop positions around the town on the social network, reported the Foreign Policy Research Institute. The battle was liveblogged in the newsfeed, with posts that included a call for help from a pinned down rebel unit and, a day later, a detailed description of the unit’s escape from harm.

It’s further proof the world is watching war in a new way—and it “likes” what it sees.