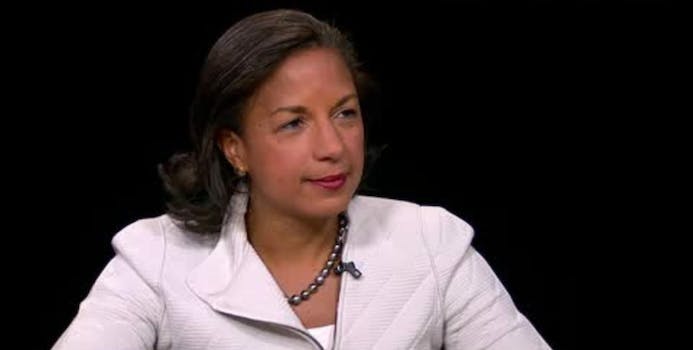 Susan Rice on Tuesday dismissed claims that she had improperly “unmasked” the names of Americans citizens incidentally collected in intelligence intercepts by U.S. spy agencies and leaked those names to the press.

Rice’s comments follow a flurry of accusations from right-wing voices accusing the former national security adviser of carrying out a politically motivated attack against President Donald Trump and his associates. But the complex nature of legal surveillance procedures creates an opportunity for useful confusion and misinformation.

As former President Barack Obama’s top security advisor, Rice said that she routinely received intelligence reports containing references to unidentified U.S. persons. It was “not uncommon,” she said, for senior national security officials to request that Americans names be “unmasked” when it appeared significant.

“The effort to ask for the identity of an American citizen is necessary to understand the importance of an intelligence report, in some instances,” Rice told MSNBC’s Andrea Mitchell.

Asked if she had the names of Trump campaign or transition staff revealed improperly, Rice was adamant: “Absolute not, for any political purposes, to spy, expose, anything.”

Rice also said that she did not leak information that led to former U.S. Army Lt. Gen Michael Flynn’s resignation. “I leaked nothing to nobody and never have and never would,” she said.

After only three weeks serving as President Trump’s national security adviser, Flynn was forced to resign after a Washington Post report claimed that he had discussed U.S. sanctions against Russia with that country’s ambassador before the inauguration—a detail he reportedly withheld from Vice President Mike Pence.

“I really can’t be particular about the pace,” she said. “Understand, over eight years, for me and others who served, it was not uncommon—in fact, it was necessary at times—to make those requests to find out the identities of U.S. officials.”

Rice also said that she didn’t “solicit” reports on foreign intercepts that involved Americans. “I only receive what the intelligence community thinks I, or any other senior official, needs to see,” she said.

An unknown number of the reports referred to U.S. citizens, some of whom apparently worked for the Trump campaign. Either their names were brought up in conversations by foreigners, or they communicated directly with a foreign surveillance target.

Even when U.S. citizens are not intentionally targeted, their communications are routinely swept up in global surveillance. This is referred to as “incidental collection.” For instance, an American who communicates with a foreign government official is likely to be recorded, even if the conversation reflects no malicious or criminal intent.

To comport with the Fourth Amendment’s prohibition on unreasonable searches and seizures, U.S. intelligence analysts follow a mandatory “minimization” procedure whereby the identities of Americans are typically concealed in disseminated reports. The raw surveillance material containing the names is also highly compartmentalized; viewing it requires not only top secret clearance, but the approval of a top intelligence official at the agency holding the records.

Rice and other senior White House advisors were authorized to request the “unmasking” of U.S. persons under certain circumstances. The request may be granted, for instance, if the information is derived from an unclassified source—i.e., it is already publicly available. A request by the president’s national security adviser would typically be approved.

Names may also be unmasked if the importance of the intelligence appears to be obscured by the process. “If I read it, and I think, you know, in order for me to really understand, is this significant or not so significant, I need to understand who the U.S. person is, I can make that request,” Rice said. “The intelligence community then processes that request through their normal procedures and if they feel they can give the answer, then they’ll give the answer.”

In the case of this controversy, Rep. Devin Nunes, the head of the House Intelligence Committee, said he was “alarmed” by the frequency with which individuals associated with the Trump campaign had been unmasked—the insinuation being that senior Obama officials sought to weaponize classified intercepts by revealing the names of Trump associates without just cause for political purposes.

While a number of conservative outlets, including Fox News and the Wall Street Journal, have fixated on Rice, because of how the unmasking process really works, the allegation also suggests that senior U.S. intelligence officials are also complicit. (The reports, while implying scandalous activity, have offered no proof that she abused the system or broke the law.) The Daily Caller made that claim on Monday evening in a report that depicting Rice as having “ordered” U.S. spy agencies to compile “spreadsheets” of calls with foreign surveillance targets involving Trump and his aides. The Caller cited as its source Joseph DiGenova, a former U.S. attorney under the Reagan administration.

“Absolutely false,” Rice said, responding to DiGenova’s claim. “No spreading. Nothing of the sort.”

“We can’t be passive consumers of this information and do our jobs effectively to protect the American people,” Rice concluded. “Imagine if we saw something of grave significance that involved Russia or China or anybody else, interfering with our political process and we needed to understand the significance of that, for us not to try to understand it would be dereliction of duty.”