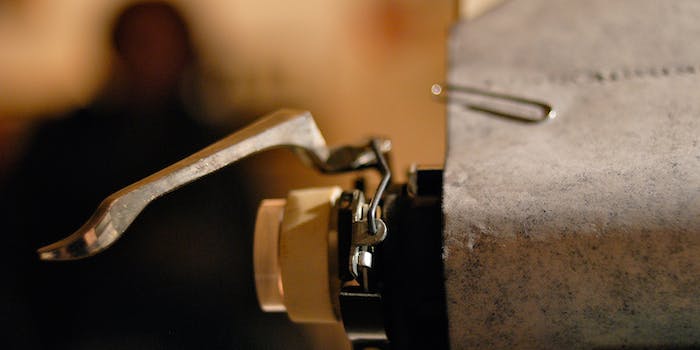 Another sign that the NSA has gone too far.

An alarming study published Monday by one of America’s top literary organizations reveals that the percentage of writers living in democratic countries who may be censoring themselves due to government surveillance is approaching levels reported by writers living under authoritarian regimes.

The new report, titled “Global Chilling: The Impact of Mass Surveillance on International Writers,” was completed in late 2014 by PEN American, an organization dedicated to preserving free expression, which surveyed 772 writers in 50 countries. The key findings further confirm that mass surveillance conducted by the U.S. National Security Agency (NSA) and its foreign counterparts has increasingly led writers to self-censor out of fear of government reprisal.

The latest PEN study expanded upon findings published in a November 2013 survey of U.S. writers that found that authors were “overwhelmingly worried about mass surveillance, and were engaging in multiple forms of self-censorship as a result.”

“Mass surveillance has badly shaken writers’ faith that democratic governments will respect their rights to privacy and freedom of expression,” the new study concluded. “Because of pervasive surveillance…writers are concerned that expressing certain views even privately or researching certain topics may lead to negative consequences.”

New 2015 global @PENamerican study on the impact of mass surveillance on writers http://t.co/KEosyPAn6o

Roughly 34 percent of writers in free countries said they had either avoided writing about specific issues, or had considered censoring their work, “due to concerns about surveillance.” The figure was only slightly lower in the United States, where more than 1 in 4 writers had likewise felt the impact of global surveillance on their work.

“Approximately 6 in 10 writers in both Western Europe (60%) and the Five Eyes (57%) countries 11 (Australia, Canada, New Zealand, and the United Kingdom) think U.S. credibility ‘has been significantly damaged for the long term’ by its surveillance programs. Another 3 in 10 writers in these regions think U.S. credibility ‘has been weakened but can be restored’ (28% and 29% respectively).”

Additionally, PEN noted that the survey may have been similarly affected by writers’ “fear and uncertainty” regarding government surveillance. Writers in other countries expressed concerns about relating their fears to PEN, a phenomenon that the group previously observed during its 2013 American survey.

“Not to sound paranoid, but I hesitated—and thought to answer very honestly—these questions,” one respondent noted.

Another wrote, “Believe it or not, completing this survey made me apprehensive. How sad, living in a democratic country. How did we come to this!”

PEN’s 42-page report concludes with recommendations directed at the U.S. government, chief among them the suspension of dragnet monitoring and collection of U.S. citizens’ communications.

“Both Congress and the executive branch should implement reforms to mass surveillance programs to ensure that constitutional and international human rights to free expression, privacy, freedom of thought, and freedom of information are fully protected,” the report states.

PEN further recommends suspending the “wholesale, unwarranted collection” of digital metadata and an increase in the judicial, legislative, and executive oversight of U.S. intelligence agency programs, including the publication of legal interpretations of U.S. surveillance policy.

In closing, the PEN report highlights that the U.S. has a responsibility, due to its adoption of international treaties, to respect the privacy rights and free expression of foreign citizens.

“As the United Nations has repeatedly stated, the International Covenant on Civil and Political Rights, to which the U.S. is a party, requires it to respect the human rights to privacy and free expression of all individuals affected by its surveillance programs,” the report says, “regardless of whether they reside in U.S. territory.”

Photo by Angus MacAskill/Flickr (CC BY 2.0)