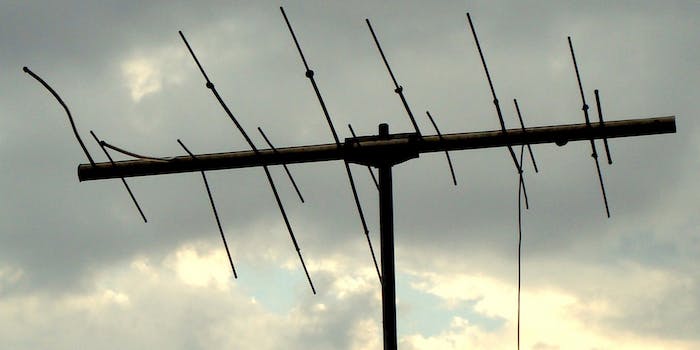 The Supreme Court could decide how you watch TV

The U.S. Supreme Court decided Friday to accept a case that could have a broad-ranging impact on how we view television on the Internet.

The U.S. Supreme Court decided Friday to accept a case that could have a broad-ranging impact on how we view television on the Internet.

The case, ABC v. Aereo, focuses on the business model of Aereo, a service that uses mini-antennas to capture over-the-air broadcast television on a cloud-based digital video recorder for paid subscribers.

Before we go any further, you’re probably wondering why anyone would buy a service like Aereo when they can get local broadcast channels for free.

Clearly you’ve never lived in a basement apartment. Home antennas can be pretty flaky, and the signal quality depends on a lot of factors that are out of your control.

So, if you don’t want to sit through painful blips in the signal when you’re watching your favorite show, you have just a few options. You can subscribe to a cable service that carries local broadcast channels—but that’s expensive and increasingly something people are cutting out of their lives.

You can also try to watch shows on the Internet, but that’s not easy either. There’s often a delay between when programs are broadcast and when they become available for viewing on network websites or Hulu. Waiting until a season is on Netfilx takes even longer.

These factors combined into what Aereo saw as an opportunity. By setting up clusters of mini-antennas in a certain service area (New York City, for example), the company can take those free, over-the-air broadcasts and become a sort of middle-man technology to get them to you. On the Aereo website, subscribers choose the local programs they want to watch using a cloud-based digital video recorder. Then, one of Aereo’s mini-antenna directs the right broadcast signal to that DVR to record the show. You can watch the show as it happens (with a slight delay), or you can save it for later viewing.

It’s a pretty affective runaround—except it takes control of how and when the shows are viewed out of the hands of the broadcast companies, without any kind of compensation. And therein lies the problem.

Several major networks—including NBC, ABC, CBS and Fox—have sued because they’re afraid services like Aereo will strip them of control of their programs and cost them billions in lost retransmission fees.

That’s no small matter for local television stations that have come to rely on those fees as an important source of revenue. Cable, satellite, and Internet competition have reduced the amount station affiliates can make with advertising. If services like Aereo start cutting into retransmission fee revenue, the networks argue it could spell financial disaster for local broadcast stations (and for the networks themselves).

The major broadcast networks are so freaked out, they’ve threatened to take their stations off the air and make them paid-only services, though that’s likely an empty threat aimed at rattling policy makers into action.

Despite the uproar from the major networks, the courts have so far taken Aereo’s side in the dispute. A New York federal appeals court upheld a lower court’s ruling to allow Aereo to operate, saying streams of shows to individual subscribers did not constitute a “public performance.” Therefore, there’s no merit to the broadcasts’ copyright infringement lawsuits.

Now that the U.S. Supreme Court has accepted the networks’ latest appeal, the networks will get another chance to make their arguments against Aereo and other similar services.

That’s what makes this case one to watch. If Aereo succeeds, the marketplace will get a green light to create more such recording services and broadcasters will have some tough decisions about how to deal with the potential loss of revenue and control. If the networks succeed, there could be a broad, chilling effect on what video can be recorded and uploaded to the Internet.

Mark your calendar to check for new developments in April. That’s when the case is expected to go before the court.