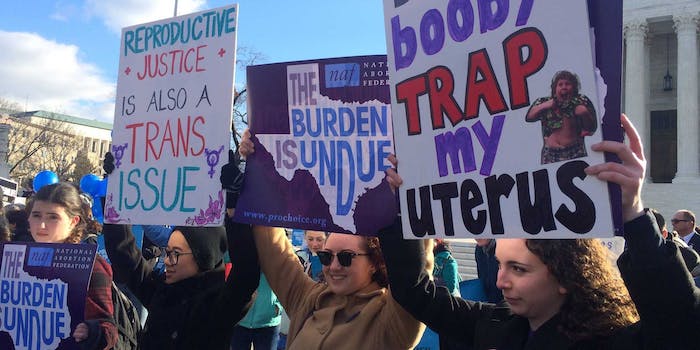 At the Supreme Court abortion hearing, a chance to witness history

Pro-choice advocates braved long lines and slept on sidewalks to get inside the court.

At 6pm ET on Tuesday night in D.C., the steps of the Supreme Court were quiet and immaculate, glittering like silver porcelain in the chilly sunset light. Most Capitol Hill workers appeared to either be ensconced inside office buildings or maybe home changing clothes in advance of Super Tuesday parties. The steps were empty but for a gently roaming security guard.

The sidewalk in front of the court was quiet too, despite being occupied by an orderly row of people sitting in camping chairs or curled up on mats, legs stretched out in sleeping bags and piles of blankets. As the unusually warm day began to drop in temperature, the 30-odd people in line prepared to sleep on the concrete—some for the second night in a row—in hopes of being allowed into the Supreme Court the next morning. Most were passionate pro-choice activists bent on watching history unfold as arguments began in the case of Whole Woman’s Health v. Hellerstedt, poised to affect nationwide abortion laws with a gravity unseen in more than two decades.

It was Brooklyn, New York, resident Brian Yeh’s second night camping outside the court. On the first night, he told the Daily Dot, he had been without a sleeping bag—but as befits the camaraderie of such events, he was lent a blanket by kind strangers. 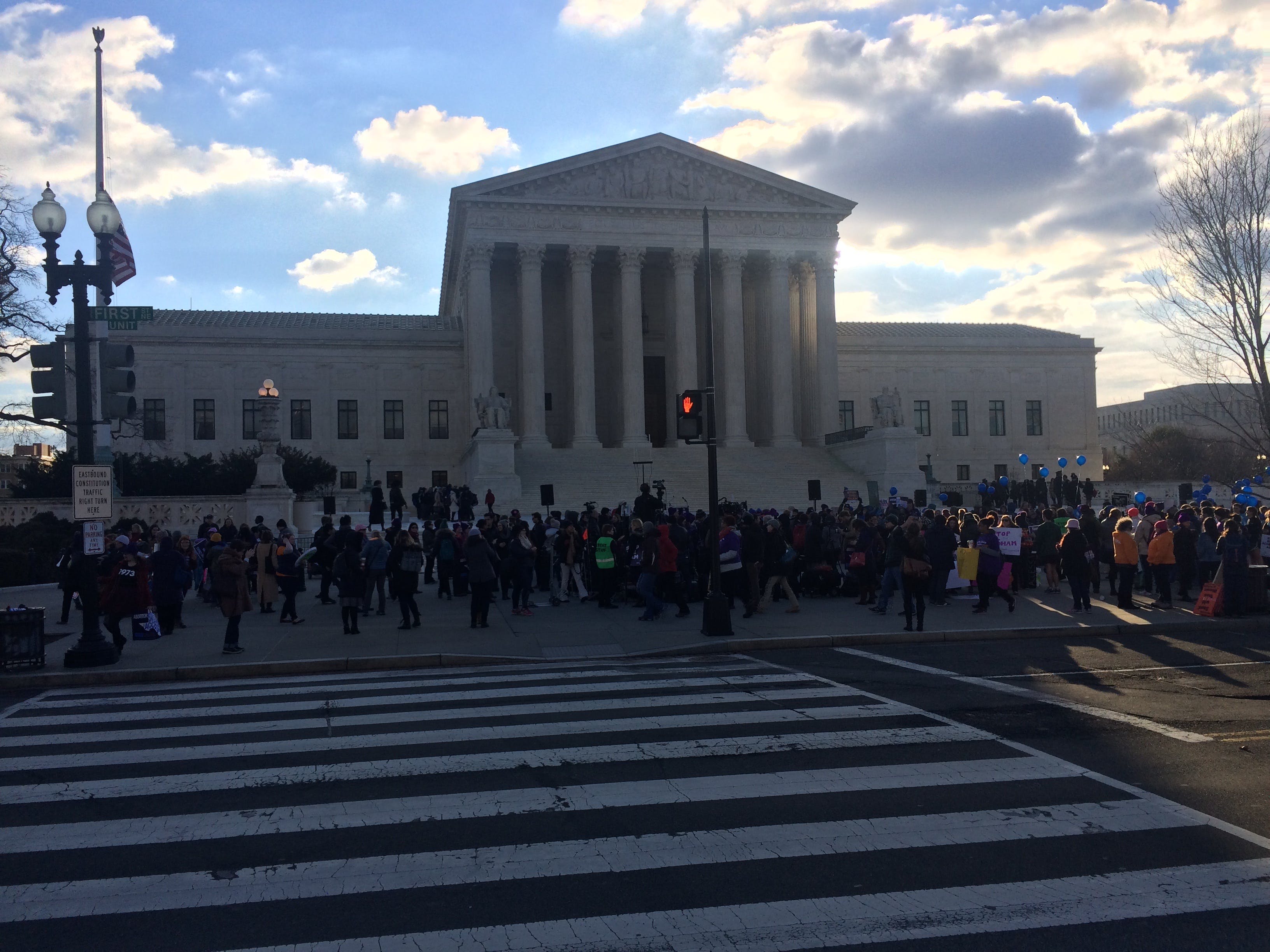 “I think we all generally expected the line to be a lot longer than it was and than it is now,” said Yeh, who was the 15th person in line for the court entry, behind an assortment of mostly paid sitters holding places for people. “Turns out I probably could have just spent the night at my friend’s place and come here today. But since we can’t predict how many people the court will let in, the closer I can be to the front the better.”

Yeh said he had attended the rally outside the court during 2015’s marriage equality ruling in Obergefell v. Hodges, and was able to see the courtroom briefly in what’s known as the “three-minute line,” where the public is quietly marched through the back of the room during hearings. But this was his first time sleeping next to the steps.

“I thought it might be a good chance to meet other people in the pro-choice reproductive justice community, and some people with differing views too,” Yeh said.

Down the line, Yeh’s friend Rebecca Suldan worked on an embroidery pattern and wore a head-to-toe fuzzy jumper with a panda hood. She was No. 17 in line, and was there in “solidarity” with a colleague who was arguing the case on behalf of Texas abortion clinics in the morning.

“I’m really excited to see Stephanie Toti argue her first case in front of the court, and do so with what I’m sure will be brilliance and integrity and passion,” Suldan told the Daily Dot. “And we got to spend 12 hours in the sun today. Also, I’m wearing a panda suit in public.”

“While our opposition hides behind junk science and secret stings, we have made our case openly and honestly, and we stand in the light.”

Across the sidewalk from the line of campers, another line had began to form on the curb—this one with only two occupants. Julie Gonen, policy director at the National Center for Lesbian Rights (NCLR), explained that she and a colleague were the only lawyers who had shown up to wait overnight in the line reserved for attorneys that had been accepted to the Supreme Court bar. In years past, SCOTUS bar attorneys could pay line-sitters to wait for them in order to secure entry to major cases like Whole Woman’s Health. But as of this court term, paid sitters are no longer allowed in the bar line.

“Last year for Obergefell v. Hodges, the marriage equality case, I got on this line at 5 o’clock in the morning,” Gonen told the Daily Dot. “Fun fact: I was actually standing on the line with Stephanie Toti, who will be arguing this case. We got here at 5 and were not able to get into the courtroom because the line was that long.”

Gonen may not have needed to camp out this time, since most wealthy attorneys are unlikely to sleep on the sidewalk, but she wasn’t taking any risks nonetheless. Gonen came prepared: She listed rain ponchos, a tent and sleeping bags, snacks, chargers, and warm clothes as just part of her inventory.

NCLR had submitted an amicus brief that was among the 47 received in support of the Texas abortion providers. Gonen emphasized the unique relationship between LGBT rights and the issues at hand in Whole Woman’s Health.

“Bogus health and safety arguments have often been used in this country to undermine the rights of disfavored groups including LGBT Americans,” Gonen said. “The laws that are being challenged here are supposedly about health and safety, but every major medical group has rejected those arguments and there’s no indication that they help women at all.”

The morning of the oral arguments, the steps of the Supreme Court were a vastly different scene. By dawn, hundreds of pro-choice activists had amassed with cartloads of cardboard signs. Group leaders handed out hot coffee as people huddled to strategize for the rally that would draw thousands—many arriving in buses from out of state—just a couple of hours into the future. By 8am ET, none of the campers from the night before were to be seen. All had made it inside the heated courtroom where their frozen extremities began to defrost.

But a new line had taken the place of the nighttime version, this one even longer. The Daily Dot approached the very last person in line the morning before the hearing to find out what drives a person to wait patiently for an entrance that may not come. Turns out, the last person in line was Rita Lucido, a founder of the Texas nonprofit Jane’s Due Process, which helps pregnant minors access judicial bypass from parental consent to obtain abortion services.

“I represent minors, who have an especially hard time getting access because they often don’t have a car and certainly don’t have the money,” Lucido told the Daily Dot about the impact of House Bill 2 on clinic closures. “And they are having to face driving five hours to Austin if they live up in the panhandle.”

(According to Google Maps, a road trip from the panhandle city of Amarillo, Texas, to the state capital is seven and a half hours long.)

Lucido, who ran for the Texas Senate as a Democrat in 2014 but lost to a Republican incumbent, said that even if she didn’t make it into the court, she was excited by the prospect of attending the rally that was beginning to form outside. When asked her views on the eight-justice court’s likelihood of deciding in favor of abortion providers, though, Lucido was careful to remain a skeptic.

“Justice Kennedy is an enigma. He did vote in favor of the stay, so that is a good sign,” noted Lucido. “And there’s a chance that if there’s a tie, they could schedule a rehearing. But that would be more than a year from now, and in the meantime we still have so few clinics in Texas. It will still hurt women.”

As Lucido and others stood patiently in the chilly morning wind hoping for a glimpse of the arguments, the rally on the steps began to ramp up. 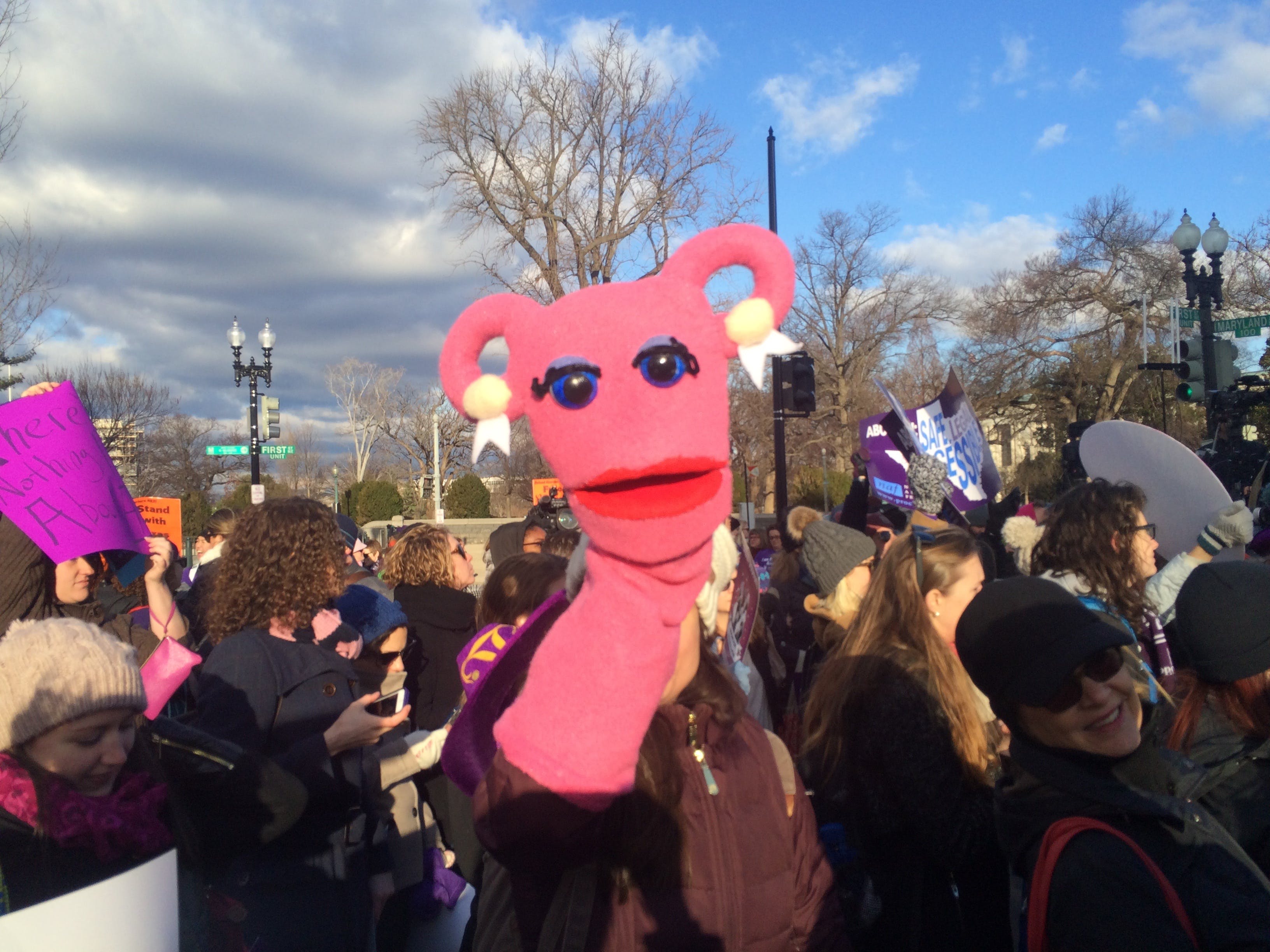 With pro-choice and women’s groups from all over the country arriving, people began to form circles and chant: “This law’s a sham, it isn’t fair, we support abortion care!” The Center for Reproductive Rights (CRR), home of the attorney arguing on behalf of the Texas clinics, started off the speakers at the podium. CRR’s Angela Hooton declared the day “a historical moment” before introducing Bishop Gene Robinson, who led a prayer devoted to those “on both sides of the issue” and asked that the Supreme Court justices “deliberate carefully and decide wisely for the common good.”

Both sides were indeed present, though in a notable disparity of numbers. As the pro-choice supporters grew to number in the thousands, a small but peaceful group of anti-abortion protesters appeared to hover in the low dozens. The opposition group carried signs that read “I am a pro-life feminist” and several young protesters carried a long black and white banner that read, “We are the pro-life generation.” 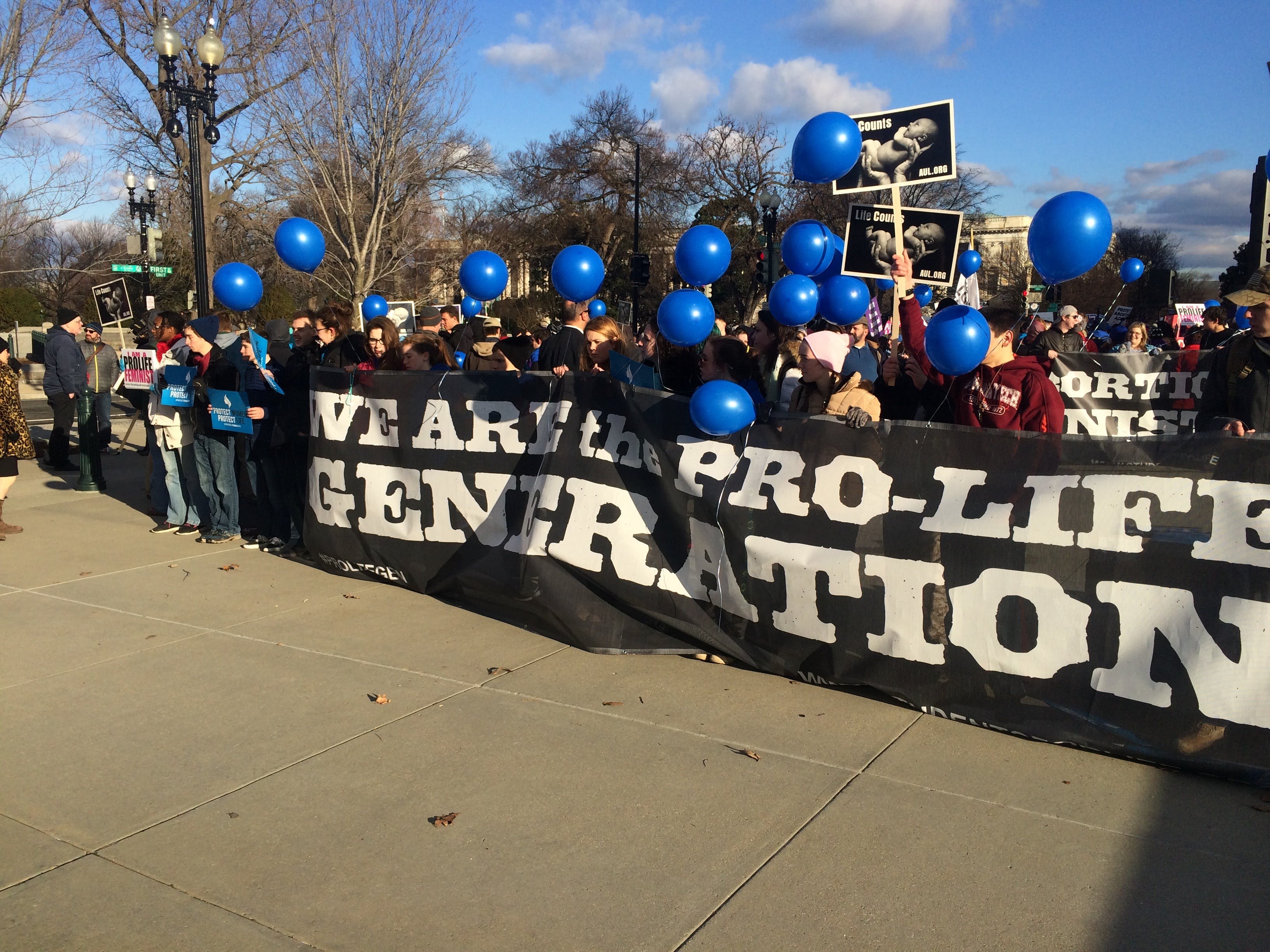 Another long-cloth banner caught the attention of many passersby. Artist Chi Nguyen’s 5.4 Million and Counting project stretched almost half the length of the considerably wide steps: a quilt of sorts made up of thousands of embroidery swatches similar to the one Suldan was stitching as she curled up in a panda suit and prepared to camp on the sidewalk the night before.

Nguyen—who said she grew up in Vietnam, where “abortion is not talked about at all” and is “socially unacceptable”—told the Daily Dot that she sought crafty types to help create the ongoing project by advertising through social media like Tumblr.

“We held stitch-ins in New York and across the U.S.,” said Nguyen. “We have 34 states and six countries participating. Everyone sent in their swatches, or held stitch-ins—to draw the line for women in Texas. Specifically the 5.4 million women of reproductive age in Texas whose healthcare will be taken away if HB 2 goes into effect.” 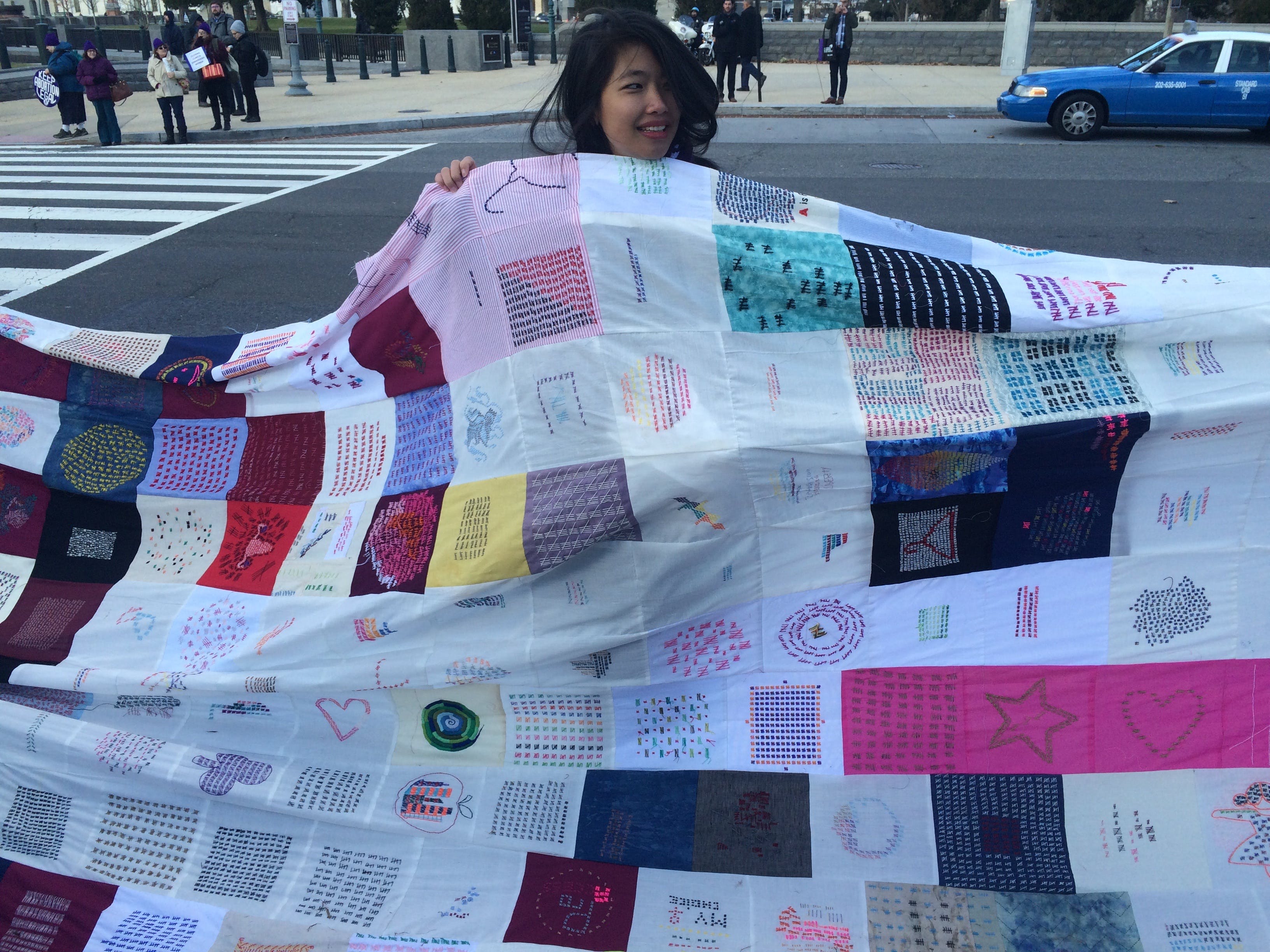 By Wednesday, Nguyen said, the quilt had 300,000 stitches—each in the form of a hatch-mark counting one woman. Stitchers will continue to make swatches for the quilt until June, the end of the Supreme Court session when many believe the justices are expected to announce a decision in the case.

Inside the court, there was no way to predict which way the unusual eight-justice court would rule. But in the absence of noted anti-abortion Justice Antonin Scalia, who died suddenly last month, the bench weighed more liberal than it had in years. And as the Daily Dot noted from inside the hearing, the liberal justices dominated questioning and appeared deeply skeptical of the state of Texas’s justifications for the restrictive law.

Plaintiffs in the case, defended before the court both by the CRR and the United States government, were careful neither to declare victory or defeat. In a statement later emailed to the Daily Dot, Whole Woman’s Health Founder and CEO Amy Hagstrom Miller said the long and difficult legal battle—which began at a local Texas court and worked its way slowly up to SCOTUS—was “nothing compared to the obstacles Texas women will face if HB 2 is not struck down.

“Over these past 3 years as we have fought this law, Whole Woman’s Health has invited cameras and reporters into our clinics, we have opened our doors to the public and we have shared thousands of pages of documents with the state,” Hagstrom Miller said in the email. “While our opposition hides behind junk science and secret stings, we have made our case openly and honestly, and we stand in the light.”

“One thing was clear from the questions the justices asked today: that the facts are on the side of Whole Woman’s Health and the women of Texas,” said Northrup in an email.

The Supreme Court justices did not announce when the case would be decided, but it’s expected sometime between now and the end of the session in June. Republican Senate clashes over President Obama’s impending nomination to replace Scalia have thrown a wrench into the prediction process: There is a chance that the court could tie and delay a second vote for a year or more as the nomination battle wears on. But for many who traveled hundreds, even thousands of miles just to witness reproductive rights history in the making, the day was a rousing success.