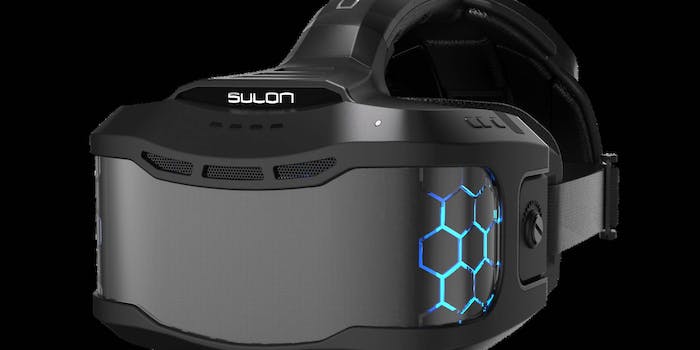 Hands on with the VR headset that outshines Oculus

Bonus feature: It keeps you from running into walls.

It seems like there’s a new VR headset coming out every other week.

With the influx of so many VR headsets, it can be hard to sift through it all. But Sulon Cortex may be pinnacle of current VR technology.

At a hotel a few minutes away from the 2015 Game Developers Conference convention center in San Francisco, I was able to go hands-on with the headset.

Unlike other VR headsets, Sulon does more than slap a screen in your face: It also analyzes the room you’re in. The device uses what it calls a spatial scanner; in simpler terms, a giant globe on the back of the headset scans the room around you. The idea is that in a VR environment, especially one in which you are physically walking and moving around in, it’s necessary for the headset to be aware of its surroundings. This means that the virtual world you travel to “fits” your actual physical location. We’ve all seen videos of Oculus Rift-wearing users walking into walls; Sulon Cortex wants to save us this embarrassment.

So if you need to walk across a 50 meter bridge, but are in a room that’s only 12 feet long, the headset accounts for this. It does this essentially by tricking the player: It moves attention away from the bridge and when the player needs to continue along the bridge, the person is then moving in another direction in the room to avoid hitting walls. It’s a smart system that, if executed perfectly, could make for some awesome gameplay opportunities.

One of the most impressive moments actually didn’t involve much interaction. I was thrown into the middle of a fight in which some other worldly beings were duking it out with punches and knives. Being able to move around the room and see the two go at it was more than just immersive, it was dreamlike. The potential to watch movies and moments happening around you sounds nothing short of amazing.

As expected, the demo yielded a few glitches. Crossing the bridge, in my case, would cause the demo to not move forward. Still, as a concept, it was impressive; I was more impressive with the Sulon Cortex than with the Oculus Rift and Project Morpheus. But now we hit the stage that we always do with VR: Wait until it hits shelves.