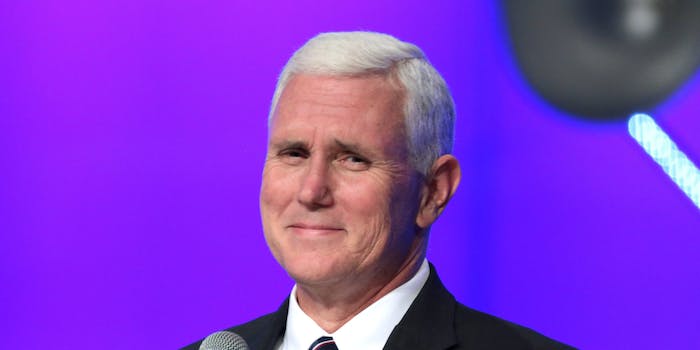 The internet just threw up in its mouth a little.

Vice President Mike Pence is many things: an evangelical Christian, former governor of Indiana, attorney, alternative to fly paper. (Those last two are arguably the same.)

According to two conservative commentators, Pence is also a bit of a sex symbol.

On Thursday, Kurt Schlicter, who writes for Townhall.com, offered a crude, unheard-of take on Pence’s appeal to among suburban women, whom both sides view as key to winning the White House in November.

“Let’s just say it… Suburban women sense that Pence knows how to lay pipe,” Schlicter tweeted. (“Lay pipe” is a euphemism for intercourse.)

Schlicter was responding to a tweet by conservative host Jesse Kelly arguing that President Donald Trump’s campaign should feature Pence more prominently to appeal to suburban moms, whose support for the ticket has eroded since 2016. Kelly similarly implied that Pence has carnal appeal among this delectable slice of the voting demographic.

“I’m picking up a lot of chatter about how….popular he is with them,” Kelly said.

It may seem strange that two straight men who are not comedians would spitball on the internet that vice president gets ladies’ motors running. But in 2020 politics, anything is possible.

Except, according to the women of the internet, that. Apparently, the 61-year-old vice president’s fuzzy white hair and perpetual squint doesn’t actually do it for them as Kelly and Schlichter allege.

Their reactions were priceless.

Probably the most generous read were those who hoped the two men were joking. “I can’t tell if this is satire or not,” said one.

Apparently, people don’t believe that women’s carnal desires are awoken by a man who calls his wife as “Mother.”

“The man is a walking cold shower according to the suburban women polls,” tweeted @Cy_Lanced.

Jokes about the fly that was in Pence’s hair for two full minutes during Wednesday’s vice presidential debate swarmed the comments like, well, flies. “The fly was clearly smitten,” said @tracydareok.

Fly jokes were probably the kindest reactions to the assertion that women think Pence is a sexy beast.

“He has all the sex appeal of a styrofoam picnic cooler,” said @vulcanelf.

“Ew,” was an incredibly common response.

Schlichter was unmoved by the nuclear revulsion his tweet inspired.

“My greatest tweet ever,” he tweeted on Friday. “Savor the comments as frowny-face libs attempt to objectively disprove this assertion of Pence’s sexual firepower.”