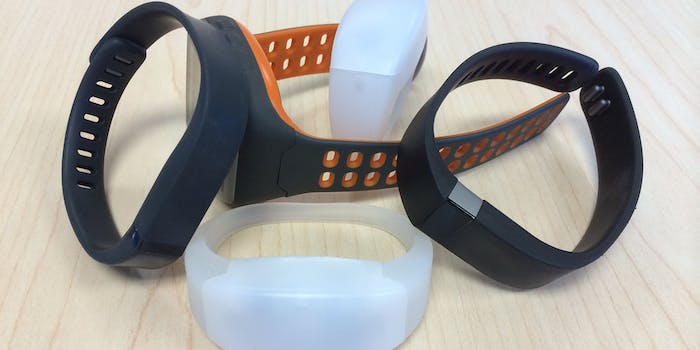 If you don't own a wearable, what are you even doing?

Wearables are all the rage at the Consumer Electronics Show (CES), but the show floor, filled with tech-obsessed companies and journalists alike, isn’t always the best gauge for how the general public feels about a new technology. In this case, however, there’s a striking match between industry geeks and mainstream consumers.

According to a forthcoming Stratos report, findings from which the company authorized the Daily Dot to publish, demand for wearable tech is as high as it has ever been.

The survey of smartphone owners found that 30 percent of them already have a wearable device, while 75 percent of respondents plan to buy one in the future. The most-purchased and most-desired devices are smart wristbands, particularly fitness-centric devices like the Fitbit and the Jawbone. Over half of wearable owners have a smart band of some sort. Wearable cameras were the second most-owned and most-wanted devices.

Stratos also found smart watches starting to climb the list of hot wearables. Currently, 24 percent of wearable users own smartwatches, while 30 percent of potential buyers picture their wrist sporting one in the future. As the design and functionality of smartwatches improve, they may eventually overtake smart wristbands as the top wearable.

The survey may also have identified the reason why Google Glass is teetering on the brink of death: Only 10 percent of people with wearables own smart glasses, while only 19 percent of people want to buy a pair in the future. Regardless, Google isn’t giving up yet.

Of course, for every product in demand, there are some that will sit on shelves and collect dust. Consumers seem to have no interest whatsoever in smart clothes: Shoes only grabbed the interest of 6 percent of those surveyed, while all other clothing garnered just 5 percent.

The reason for the lack of interest in connected fashion may explain other findings in the survey. When Stratos asked respondents about mobile payments, it found that digital cards and mobile devices were the only payment methods in which people seemed interested. (Last October, Stratos received $5.8 million to make its own smart payment card, dubbed the Stratos Card.)

“Consumers are rapidly incorporating wearable technology into their lives, but they want the right wearable for the right function,” Thiago Olson, co-founder and CEO of Stratos, Inc., said in the survey document. “Just like a wristband feels right for health monitoring—the connected card with its familiar plastic form is the preferred payment wearable.”

Stratos will release the full wearables survey on Jan. 13.