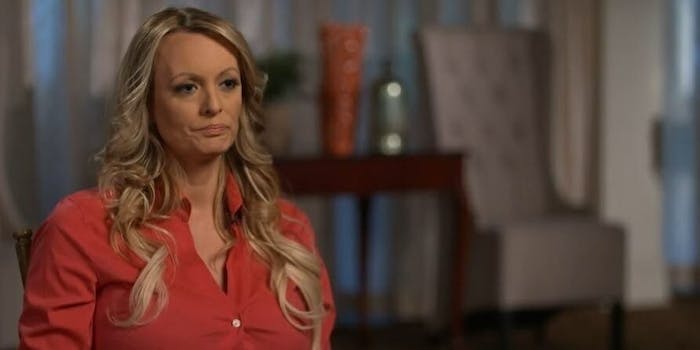 'They better be very, very careful after Sunday night.'

The 60 Minutes interview with Stormy Daniels, the adult film star who said she had an affair with President Donald Trump, is set to run Sunday night. It’s unclear if Trump will be on Twitter when Anderson Cooper’s talk with her is airing, but this week, Daniels’ lawyer might have given the president something to think about.

And according to lawyer Michael Avenatti, that was the point.

This was what he tweeted Thursday.

If “a picture is worth a thousand words,” how many words is this worth?????#60minutes #pleasedenyit #basta pic.twitter.com/eCkU0JBZaR

It’s either a CD or a DVD inside what appears to be a safe, and the implication, it would seem, is that it contains sensitive information about Trump. Later, in an interview with CNN (via MSN), Avenatti called the tweet a warning.

“I want to be really clear about this: It is a warning shot. And it’s a warning shot to Michael Cohen and anyone else associated with President Trump that they better be very, very careful after Sunday night relating to what they say about my client and what spin or lies they attempt to tell the American people,” Avenatti said.

Cohen is Trump’s lawyer who said he paid Daniels $130,000, reportedly so she’d keep quiet about her alleged affair with the Trump (Cohen also said he was never reimbursed for the payment). Since then, Trump said Daniels now owes him $20 million for breaking a non-disclosure agreement, and she said, now that Cohen has talked about her payment, she’s free to tell all about their relationship.

It’s unclear what she told interviewer Anderson Cooper for Sunday’s broadcast. But you can bet the interview and its aftermath will be quite fascinating to experience.