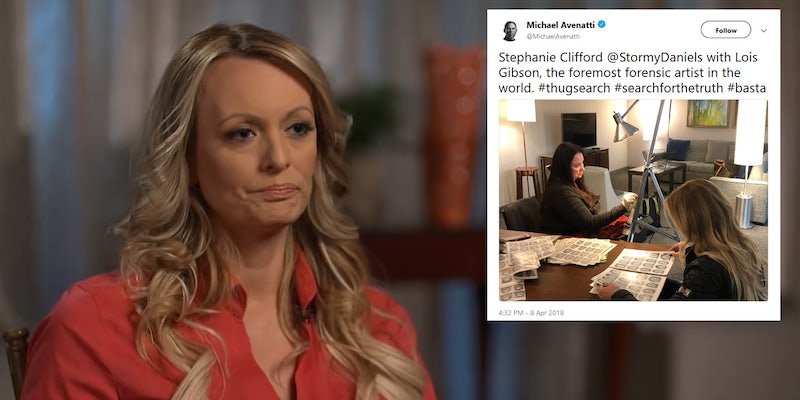 Michael Avenatti said the sketch would be released on Tuesday.

The lawyer for adult film actress Stormy Daniels has filed another motion to depose President Donald Trump and his lawyer Michael Cohen to find out if Trump knew about a nondisclosure agreement drawn up about the alleged affair between him and Daniels.

“Here is the renewed motion we just filed seeking to depose Mr. Trump and Mr. Cohen, as well as an expedited jury trial,” he wrote, posting a link to the court document.

Here is the renewed motion we just filed seeking to depose Mr. Trump and Mr. Cohen, as well as an expedited jury trial. #searchforthetruth #bastahttps://t.co/qzrzUUoNxL

The motion requests for Trump and Cohen to be deposed for “no greater than two hours” and asks for “no more than ten targeted requests for production of documents.”

The new request for a deposition comes on the heels of the president denying that he knew about the $130,000 payment to Daniels by Cohen in the runup to the 2016 election in an effort to keep the adult film actress from talking about their alleged affair.

On Monday, Avenatti also continued to make waves, telling CNN’s New Day that a composite sketch has been made of a person Daniels said threatened her in 2011 following her interview with InTouch magazine about her alleged affair with Trump.

Daniels, during an interview with 60 Minutes, said someone told her to “leave Trump alone” and looked at her daughter and said “‘That’s a beautiful little girl. It’d be a shame if something happened to her mom.'”

Avenatti said they would release a sketch made of the person Daniels said threatened her on Tuesday.

“My client sat down with Lois Gibson, she’s the foremost forensic artist in the world, she has a world record for the number of IDs. A composite sketch has been produced,” he said. “We’re going to be releasing that tomorrow along with a significant reward, asking that the public come forward.”

Lawyer Michael Avenatti says he and Stormy Daniels have a composite sketch of the person they say threatened her and will release it tomorrow to get help from the public in identifying that person https://t.co/bMnLxtIX5m pic.twitter.com/bP6bl9hm6w

“We’re very close to identifying this individual,” he said, but would not say whether he was working with law enforcement with the sketch.