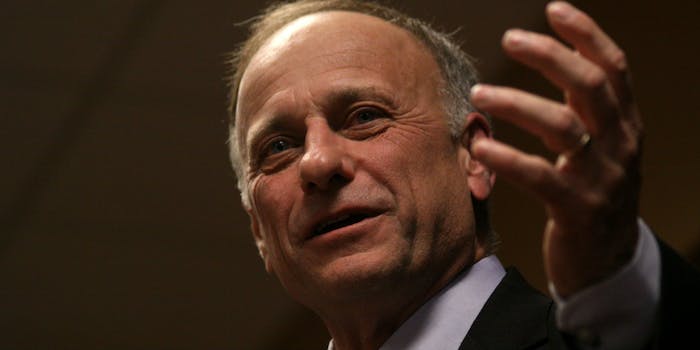 It's just the latest instance of questionable spending in his career.

Veteran GOP Rep. Steve King of Iowa has spent $18,000 in food and drinks at Washington, D.C.’s Capitol Hill Club since 2004, according to a report from The Intercept.

King, who is seeking reelection in Iowa’ s 4th district, a Republican stronghold, has been a strong defender of responsible public spending since he took office. In 2009, King even introduced a bill that would cut “wasteful public spending”

Many of the expenses billed were related to events hosted by the Conservative Opportunity Society, a Congressional caucus King has headed since 2015. Meals at the Capitol Hill Club can be costly; a chicken breast meal costs $49, and  the breakfast buffet is $34. The Conservative Opportunity Society often meets there for breakfast; it’s just a short distance from the Cannon House Office Building.

The spending is part of an allocated budget every congressional representative has access to for staff, travel, and constituent-related expenses; all of it is taxpayer funded.

His spending habits have also been under scrutiny in the past; since 2004, he has spent $805,000 to hire his son and daughter-in-law to work for his campaign. Ethics watchdogs noted that “King’s family appeared to be paid even when the campaign engaged in no significant activities during off years,” according to The Intercept.

King attracts attention for his ties with far-right groups in Europe, as well as his anti-immigration stance. Throughout the years, King has met with controversial figures in  Austria, Germany, Hungary, the Netherlands, France, and the UK. According to The Intercept, King has spent $118,000 on government-funded fact-finding missions abroad, which include meetings with European anti-immigration activists.

Even after fifteen years in Congress, King is one representative whose seat is believed to be a stronghold for the Republican party. Still, polls have tightened in the last few weeks and one poll gave King a mere 6 percent lead over his Democratic opponent, J.D. Scholten, a candidate backed by Bernie Sanders.