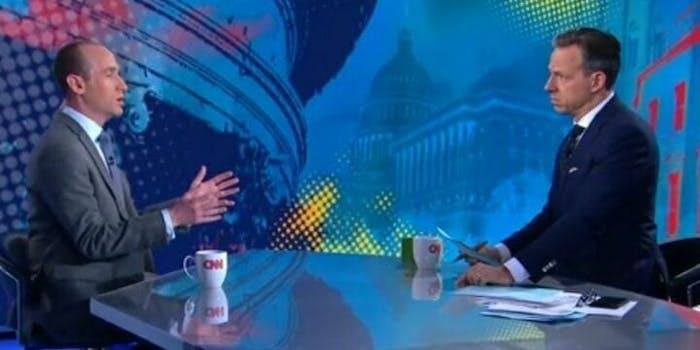 During an interview with Stephen Miller on Sunday morning, CNN’s Jake Tapper told Donald Trump’s adviser that he was wasting his viewers’ time and abruptly ended the segment while Miller was still talking.

“There’s one viewer you care about right now,” Tapper said, referring to Trump. “You’re being obsequious. … I think I’ve wasted enough of my viewers’ time.”

"There's one viewer that you care about right now," Jake Tapper says to Stephen Miller as he cuts him off before his show goes to commercial pic.twitter.com/SigvYOG1xo

Tapper talked to Miller about Michael Wolff’s new book, Fire and Fury, and about former Trump strategist Steve Bannon’s role in the book. Miller called Bannon’s comments in the book “grotesque” and said the book “is best understood as a work of very poorly written fiction. I also will say that the author is a garbage author of a garbage book.”

Miller also called Trump a “political genius” multiple times. After Miller said again that Trump was a genius, Tapper said he was sure Trump was happy Miller had said that, leading Miller to rip Tapper and CNN. At one point, Tapper asked Miller to settle down, not unlike a parent asking his child to stop acting up in a crowded restaurant.

Tapper also asked about Trump’s tweets on Saturday about how he was a “very stable genius” and “like, really smart” and questioned Miller on whether those assertations were helpful to Trump’s cause.

Soon afterward, Trump weighed in on the segment.

Jake Tapper of Fake News CNN just got destroyed in his interview with Stephen Miller of the Trump Administration. Watch the hatred and unfairness of this CNN flunky!