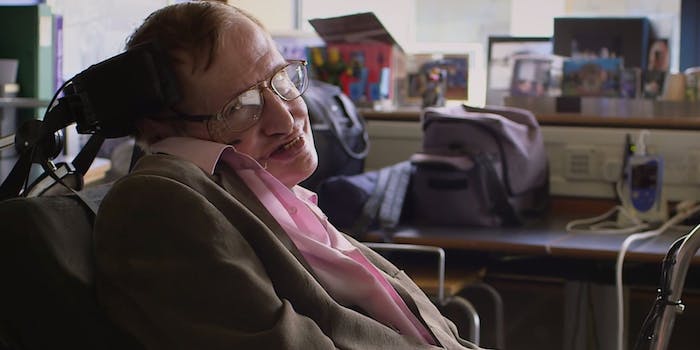 The possible applications of this very precise technology are endless.

The impressive technology that lets the paralyzed British physicist communicate has been open-sourced, meaning that anyone can use and change it as they see fit.

Hawking uses Intel’s Assistive Context-Aware Toolkit to speak despite a rare and prolonged form of amyotrophic lateral sclerosis (ALS) that began paralyzing him decades ago. The release of the code means that millions of people can benefit from this technology, which can reportedly speed up common tasks by an order of magnitude.

Microsoft’s Mansib Rahman explored the software in depth, using his face to communicate with Hawking’s voice in an effort to better understand and popularize the technology.

Hawking, who cannot speak or move the majority of his body, uses his cheek to send commands to the computer. Using that small portion of his face, Hawking controls a virtual keyboard that predicts words in a similar way as the common smartphone feature. In fact, Hawking’s system uses a specialized version of SwiftKey tailored specifically to the scientist based on his previous speech and extensive written works.