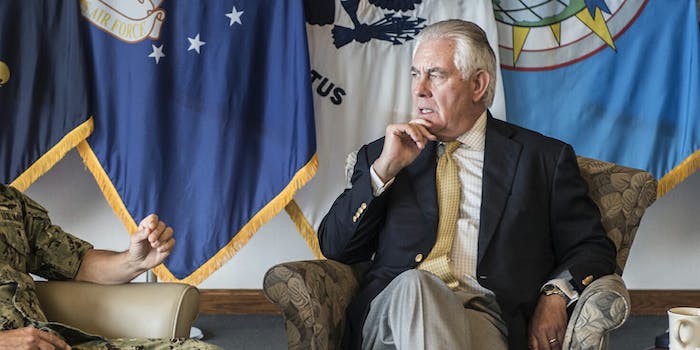 It's been allocated $120 million recently.

The State Department has not spent any of the money it was granted to battle Russia’s interference in elections, according to a new report.

Congress has allocated $60 million to the State Department two separate times: once at the end of 2016 during President Barack Obama‘s term and another for the next fiscal year; but both sums of money have yet to be spent on helping prepare the United States for foreign attacks on elections, the New York Times reports.

Secretary of State Rex Tillerson, who just recently warned that Russia would likely target the United States’ 2018 midterm elections, spent seven months trying to decide how to spend the first $60 million allocated for the prevention of future election meddling, the Times reports. With just days left in the fiscal year, he asked the Defense Department to transfer the funds allocated to the State Department. The request was denied, but another round of $60 million was made available for the next fiscal year.

Last week the State Department said it would launch a $40 million program focusing on foreign propaganda and disinformation, an announcement which the Times points out came after news outlets began asking about the lack of spending from Tillerson’s department.

As a result of the lack of spending, not one of the 23 analysts at the department’s Global Engagement Center, which reportedly will focus on Russian election meddling, speaks Russian.

The decision not to aggressively spend money on Russian election interference mirrors President Donald Trump‘s less-than-proactive approach to Russia following the discovery of its widespread attempts to sow discord and spread information ahead of the 2016 election, including on social media.