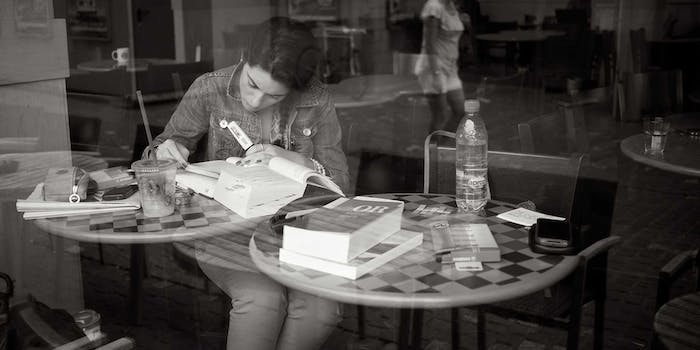 Make that a grande education, with whipped cream on top.

Starbucks will pay for its employees to get a college degree.

For employees who have already attained two years of college credit, Starbucks will pay full tuition. Those with fewer credits will receive a partial scholarship to finish their degrees.

The program is available to any of Starbucks’ 135,000 employees in the United States, who don’t yet have a bachelor’s degree, work at least 20 hours a week, and have the grades to get accepted to ASU. The program also includes those who work at all of Starbucks’ subsidiaries, like Teavana and La Boulange.

Starbucks says that some 70 percent of its employees “are students or aspiring students.”

So, what’s the catch? Surely Starbucks isn’t just doing this out of the goodness of its corporate heart. But how Starbucks benefits from this—beyond attracting the kinds of ambitious, motivated, and disciplined employees who are able to work part or full time and simultaneously earn a bachelor’s degree—is not totally clear. And maybe there is no simple, schematic answer.

The Starbucks program bucks a couple different trends: Undergraduate educational assistance offered by employers is down to 54 percent in 2014, from 62 percent in 2010, according to a 2014 survey quoted by the Wall Street Journal. And while Walmart announced in 2010 that it would cover 15 percent of its employees tuition costs, the only students who were eligible were those who studied things like retail management and logistics—things that would make them better Walmart employees.

Employees who take advantage of Starbucks’ offering, however, “will have no commitment to remain at Starbucks past graduation,” the company says. And they can study whatever they like.

“Starbucks is going where no other major corporation has gone,” Jamie P. Merisotis, president and chief executive of the Lumina Foundation, a group focused on education, told the New York Times. “For many of these Starbucks employees, an online university education is the only reasonable way they’re going to get a bachelor’s degree.”

ASU President Michael Crow estimated to the Wall Street Journal that the program will attract somewhere between 15,000 and 20,000 Starbucks employees a year. To accommodate the influx of students, ASU has added 50 teachers, enrollment counselors, and academic advisors.