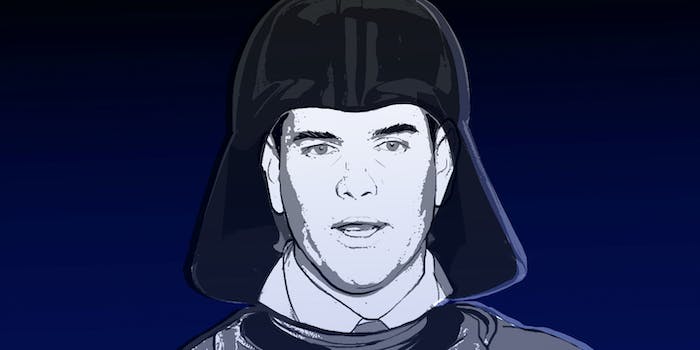 He knows a thing or two about Anakin Skywalker.

Marco Rubio offered an insightful take on one of the most popular Star Wars characters at a campaign event in New Hampshire on Wednesday.

The Florida senator and Republican presidential candidate was asked at Saint Anselm College about the upcoming seventh Star Wars film, The Force Awakens, and he eventually ended up describing his conflicted feelings about Darth Vader.

“I used to hate Darth Vader, but now I kind of feel a little bit sorry for him knowing what he went through to get to that point. And he’s probably the most fascinating character in the whole movie, because he started out as this individual with a lot of talent and promise, then something went wrong, something went really bad, he went dark, he went nasty.”

Rubio’s comment highlights the role of the Star Wars prequels in illustrating the origins of Darth Vader, originally a former slave named Anakin Skywalker. Although the prequels are divisive both within and outside of the Star Wars fan community, their depiction of Skywalker’s harsh childhood and subsequent emotional turmoil added significant context to the story of perhaps the most iconic villain in entertainment history.

Rubio’s campaign did not respond when asked whether the senator enjoyed the prequels and whether he would see The Force Awakens—which features a character intent on carrying forward Vader’s dark legacy—on opening weekend.

Rubio, the youngest presidential candidate, has tried to capitalize on his pop-culture knowledge to appeal to an increasingly younger, more diverse electorate. He is also known to prefer Star Wars to Star Trek because of its political content, although in fairness to the older franchise, Trek has been perhaps even more overtly political in its nearly 50-year run of TV shows and movies.

The design team is having a little fun with photoshop today. @marcorubio for President #maythe4thbewithyou pic.twitter.com/855SxmToVg

Rubio has competition on the Star Wars front from two other young senators. Rand Paul (R-Ky.) and Ted Cruz (R-Texas) have also dropped plenty of Star Wars references to illustrate their political beliefs.

In a surprising blunder that could push Star Wars enthusiasts into those other senators’ camps, Rubio mixed up the first two Star Wars films, A New Hope and The Empire Strikes Back, in his talk at Saint Anselm. He described a Death Star toy that he owned as a child by saying that it “kept breaking, just like it did in part two, Empire Strikes Back, where it blew up because the guy got that rocket to go into that hole.”

At press time, the senator’s campaign had yet to issue a correction.