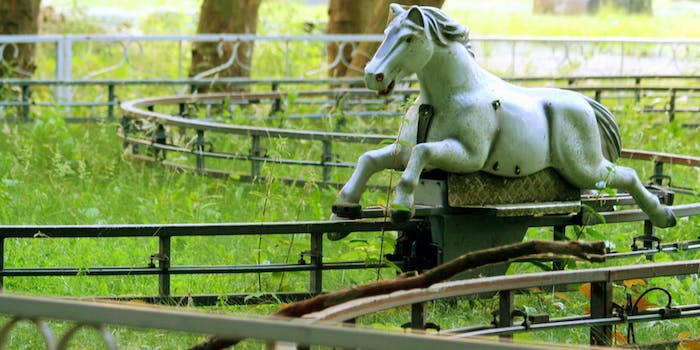 World’s creepiest abandoned theme park up for grabs on eBay

Trespassers will be scared to death.

If you’ve seen the climax of the 2011 action thriller Hanna, then you already know what a spooky place Spreepark is. The Berlin amusement park has been abandoned since 2002, when its manager was arrested for trafficking millions of dollars in cocaine from Peru to Germany inside the Fliegender Teppich, a “Flying Carpet” ride.

Now, for a comparable sum, the park can be all yours. The Spreepark lease is the hottest new listing on eBay, with an asking price of €1.62 million ($2.23 million). Caveat emptor, however—the buildings are “mostly destroyed.” Still, a perfect place to strike shady business deals, or conduct a cult ritual, or possibly encounter an apparition like Der Großmann.

I mean, get a load of this place. It looks like the cover of a Goosebumps novel. You just know all those nooks and crannies are full of ghosts with weird accents.

The park’s iconic Ferris wheel, by the way, still spins, depending on the wind—and produces a rusty, screeching sound of pure horror.

For further proof of atmospheric creepiness, check out the on-location music video for “Run Dry,” by the German band Sizarr.

OK, so the place could use some sprucing up, but don’t get any big ideas: you can’t develop the land for non-recreational use until 2061. In the meantime, there’s an interesting study to be done about how the park was Westernized after the Berlin wall came down. Provided you aren’t killed by an axe murder living in the funhouse, that is.

H/T CNET | Photo by Till Krech/Flickr