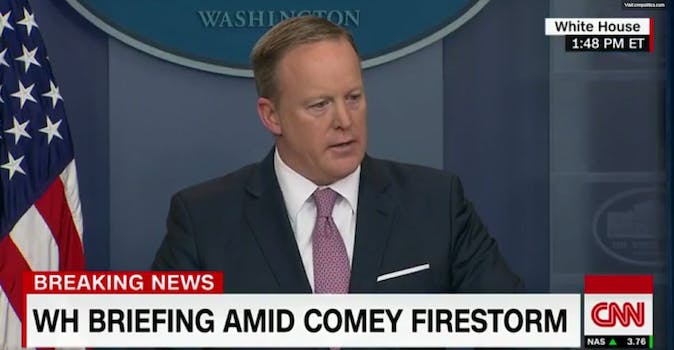 Spicer dodges questions about Trump recording in the White House

'There is nothing further to add on that.'

White House Press Secretary Sean Spicer refused to answer a question posed during Friday’s press briefing on whether or not President Donald Trump has recorded conversations in the White House.

Spicer was asked if Trump recorded conversations with former FBI Director James Comey, something that appeared to be hinted at in a Friday morning tweet from the president.

“I assume you’re referring to the tweet,” Spicer said. “I’ve talked to the president. The president has nothing further to add on that.”

Spicer was asked what people should interpret from the tweet, which gleaned the same response. Finally, Spicer was asked bluntly if there were “recording devices in the Oval Office or residence.”

“As I’ve said for the third time, there is nothing further to add on that,” Spicer said, later adding that the tweet “speaks for itself.”

Press Sec. on Pres. Trump's tweet saying ”Comey better hope" there are no tapes of their convos: “The president has nothing further to add" pic.twitter.com/JuMnj5rWXV

On Friday morning Trump tweeted a vague threat toward the former FBI director, saying that Comey should hope “there are no ‘tapes’ of our conversations.”

During Friday’s press conference, Spicer said he was “not aware” of any audio recording of a Jan. 27 dinner between Trump and Comey. Trump has asserted that the dinner was one of several instances the former FBI director told him he was not under investigation.

If Trump did tape conversations he had with Comey, he would be within his legal rights, according to PolitiFact.

Washington, D.C., has a “one-party consent” law when it comes to recording conversations, meaning that taping a conversation is legal as long as one person in the conversation is aware that a recording is taking place. If recorded tapes do exist, at least one Democratic member of Congress wants to hear them.

“I would respectfully request that the White House Counsel provide the House Oversight Committee with all tapes of the President’s communications with former FBI Director James Comey, of President Trump’s meeting with Russian officials which was closed to American press but not their Russian counterparts, and of any conversations regarding the hiring or firing of former National Security Advisor Michael Flynn,” Krishnamoorthi said in a statement.