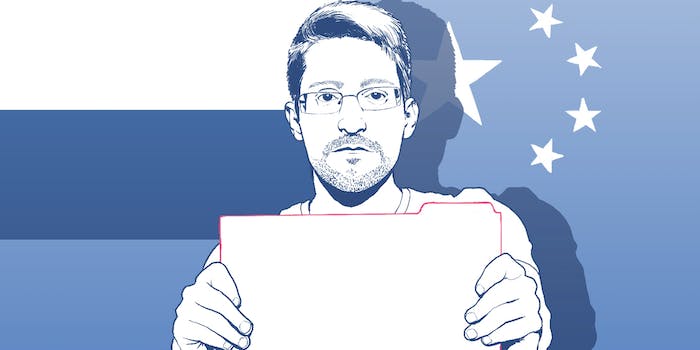 This is getting ugly.

Accused of publishing government propaganda against NSA whistleblower Edward Snowden, the Sunday Times is using copyright to hit back at its strongest critic.

In a paywalled feature published Sunday, titled “British spies betrayed to Russians and Chinese,” three authors, citing anonymous government sources, claim that “Russia and China have cracked the top-secret cache of files stolen by the fugitive U.S. whistleblower Edward Snowden.” In turn, the Times’s sources say, the U.K. had to relocate special agents around the world who were allegedly in harm’s way.

In an extremely critical takedown post, The Intercept’s Glenn Greenwald, the journalist Snowden first met with after fleeing the U.S., denied many of the details in the Times story. In particular, the Times claimed that Greenwald’s partner, David Miranda, met with Snowden in Moscow to receive more documents—a claim that’s since been deleted from the Times article.

Greenwald’s post also includes a screengrab of the Times’s layout—and that’s what the Times used to pounce on their high-profile critic. In a legal notice sent Monday, the paper cites the Digital Millennium Copyright Act (DMCA) and claims the Intercept is violating the Times’s copyright of “the typographical arrangement of the front page.”

“If Greenwald were selling a book of Great Covers of the Sunday Times, they’d have a case,” Parker Higgins, an activist at the Electronic Frontier Foundation who specializes in intellectual property, told the Daily Dot. “But this is grasping at straws and attempting to use the strictest takedown law available—copyright—just to silence criticism.”

There’s a long history of people accused of using online copyright law to censor critics; a recent smattering includes California mayors, lawyers, Drake’s label, and Ecuador. The Times didn’t respond to the Daily Dot’s question of just how frequently it issues those claims to other news outlets.

It’s not likely to have much effect on the Intercept’s story, though. When the Daily Dot asked Greenwald if he would abide the DMCA takedown, he simply responded “No.”