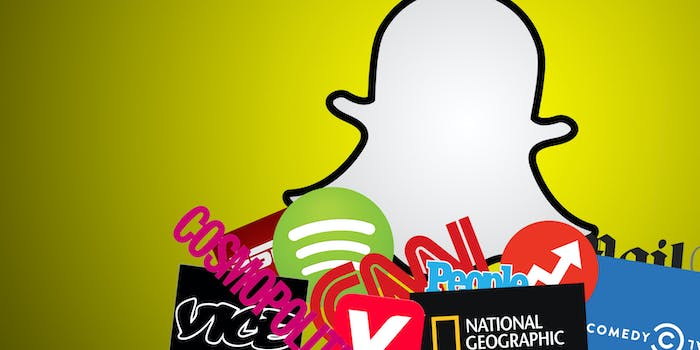 Snapchat teams up with Spotify, VICE, CNN and more

It's not the only social network making in-roads into native content.

Snapchat is gearing up for a major move into the content business, Digiday reports, planning partnerships with triple-A media properties like CNN, Spotify, ESPN, the Daily Mail, and VICE.

It’s been clear for some time that Snapchat has aspirations beyond user-to-user communication. Over the past few months, the ephemeral messaging service has regularly teamed up with concerts and sporting events to bring in new users and demonstrate the benefits of its product. According to the Wall Street Journal, Snapchat has been exploring options for bringing news to the platform since August 2014.

New mock-ups obtained by Digiday make clear the extent of Snapchat’s ambitions. The app intends to move beyond video and photos, they report, hoping “to serve its users text and audio, which would make it an all-inclusive media consumption app.”

In addition to mainstream platforms like CNN, the Daily Mail, and ESPN, Snapchat’s other partners include Comedy Central, Cosmopolitan, BuzzFeed, Spotify, Vevo, National Geographic, and People Magazine. This broad mix of established titles and hot new properties forms a veritable who’s-who of the digital media landscape. ESPN and Vevo have both confirmed they are in “discussions” with Snapchat; the other companies have declined to comment.

Snapchat’s new content is believed to be intended for a new section of the app tentatively known as “Discover” (the Journal called it “Discovery”). In keeping with Snapchat’s transient ethos, “Discover” content will also disappear after a set amount of time. Snapchat is said to be planning advertising-revenue sharing to entice more partners to join the project..

Snapchat isn’t alone in its native content aspirations. Facebook is working to become a hub for content by encouraging publishers to post their stories directly to the platform rather than linking elsewhere. So far, Facebook’s overtures to media organizations have not been well received.

Facebook is also expected to make further attempts to encourage video producers to leave YouTube, despite warnings from industry experts that Facebook’s lax approach to copyright is failing content creators.

Digiday’s report says that Discover’s launch date is uncertain. Apparently, technical issues have pushed back a launch that was planned for November 2014.