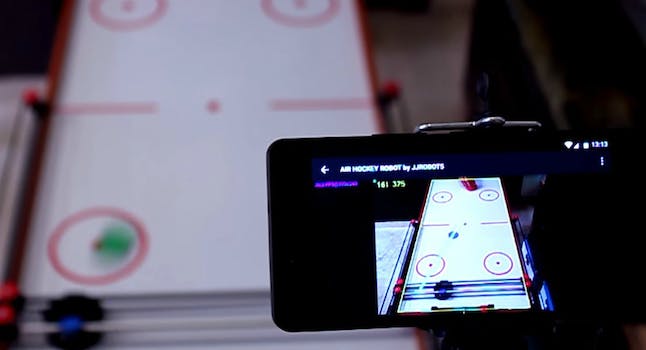 Jose Julio seems obsessed with figuring out ways for machines to decimate humans playing air hockey. Two years ago, Julio—a man who loves DIY robotics—used a hacked 3D printer to blast out the humans it took it on.

But now, Julio has a new challenge: How would a smartphone fare against an opponent made of flesh and blood?

Here’s how it looks.

As compared to his air hockey printer, Julio writes on his website that the smartphone is easier to set up and use. All you need is an air hockey table, the robot (which you can purchase from Julio), the Air Hockey Robot app, and your smartphone.

Writes Julio: “Your smartphone, running the Air Hockey Robot APP, can detect features on the playing court and make decisions according to the detected objects location and their trajectories (and attack/defend in consequence!).”

So, how does it work?

“The smartphone’s camera is looking at the playing court,” writes Julio. “The camera’s captured data is processed in real time by the smartphone. Detecting the position of the puck and the “Pusher robot” (and according to the current location of all the elements on the court), your smartphone makes decisions and commands the Robot what to do via Wi-Fi.

“Your smartphone will become an augmented reality device, showing predicted trajectories and position of all the objects involved in this game. The Robot is locally controlled by the jjRobots Brain Shield, which dictates the speed and acceleration of the robot, sending the appropriate pulses to the stepper motors. Easy!”

Easy for him to say, and it also looks like it might be easy to lose at air hockey to your own phone. Or you can do the next best thing: Bring the robot to Chuck E. Cheese’s and hustle all the kids out of their tokens.