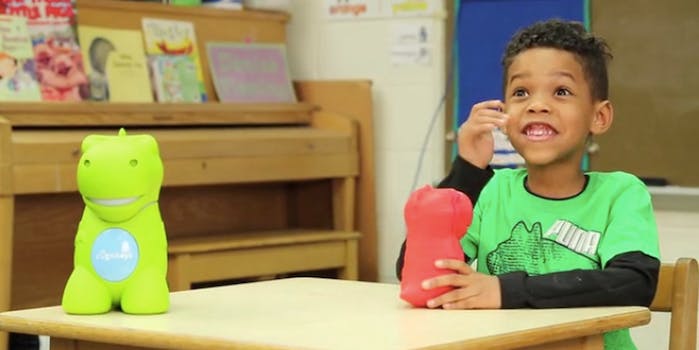 The rise of the machines that play with your children

But is making playtime smarter actually a good thing?

Elemental Path recently debuted CogniToys, Internet-connected toy dinosaurs powered by the IBM Watson Supercomputer. Green Dino, the first in its line, is designed to engage with children and learn their behaviors as well as simpler things, like their names, ages, and favorite colors. 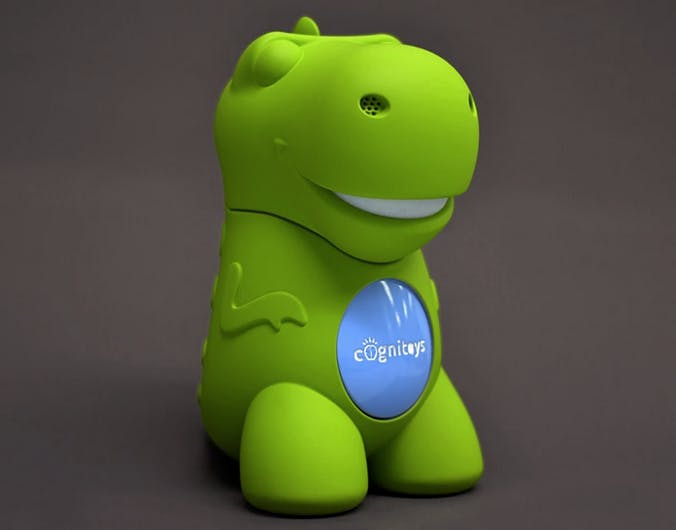 The dinosaur sounds like a raspier version of Sesame Street’s Cookie Monster, and in order to engage with it, kids push a button on its stomach and begin talking. It can tell jokes, remember previous conversations, and comes pre-programmed with education tools that help kids learn math and vocabulary. The company is using Kickstarter to crowdfund the talking dinosaur, and you can sign up to claim your own CogniToy for $99.

Green Dino isn’t just a plaything. According to Elemental Path, the toy actually learns and grows with your child.

“The toy will develop a capacity to reason about the child’s life,” the company said in its Kickstarter video.

The dinosaur can understand what age your child is, what educational puzzles might be the most appropriate, and it could potentially provide feedback and advice once it’s fully immersed in the child’s life. And the toy’s personality changes based on how the kid interacts with it.

Dinosaurs aren’t the only historically lovable toys getting a reboot. Barbie will soon be able to have conversations with your kids, too.

Mattel is partnering with ToyTalk, makers of mobile applications that talk back to kids. Called “Hello Barbie,” the toy will be able to have conversations and tell jokes, and even remember the information children share to parrot it back later, the BBC reported.

Siri-like interactions seem innocent enough, and with everything else in our homes connected to the Internet, it was only a matter of time before toyboxes began filling up with dolls and animals that engage more than the child’s imagination.

But as we’ve seen with connected home appliances, there are still a number of bugs and kinks to work through before we’re willing to sign our homes over to being run by the machines. Let’s not forget the children terrorized by hackable webcams and baby monitors.

Toys are no different. Cayla, one smart toy designed to have conversations with kiddos, was reportedly hacked so the doll could say a variety of naughty words, rendering the safety protocols designed to keep the chatting G-rated useless.

Green Dino and Hello Barbie still can’t be found in your local Toys ‘R’ Us yet, but the inevitable digitization of playtime is fully upon us.

Just make sure your kids stay away from the robot vacuums.