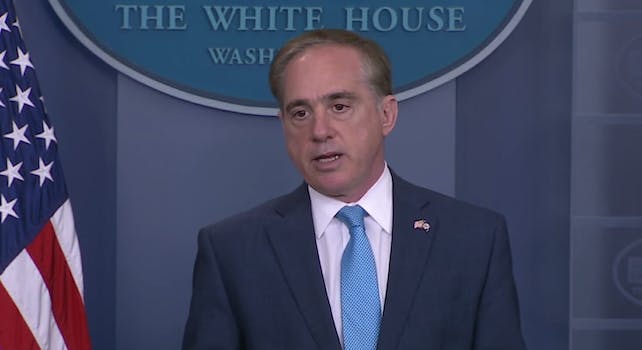 The trip cost taxpayers more than $4,000, according to the report.

The chief of staff for Veteran Affairs Secretary David Shulkin altered an email and made false statements in order to cover expenses for his wife to travel to Europe last summer, according to reports.

Vivieca Wright Simpson, Shulkin’s chief of staff, changed language in an email from an aide to try and justify his wife’s travel expenses by making it seem like the Veterans Affairs secretary was receiving an award from the Danish government, therefore allowing her to come on the trip, the Washington Post reports. The email was discovered as part of an investigation by the Office of the Inspector General (OIG).

Shulkin traveled to Europe from July 10 to July 21 last year, according to travel records.

According to the OIG’s report, they received an anonymous complaint alleging that “the trip was a misuse of VA funds because the trip included a significant amount of personal time” including Shulkin visiting the Wimbledon tennis tournament. The agency did not find evidence that the Veterans Affairs secretary was aware that his chief of staff altered the email.

The report also found that when Shulkin visited Wimbledon in July 2017, he received tickets from Victoria Gosling, the head of Social Impact at Auden, a for-profit group. When questioned the Veterans Affairs secretary told investigators that he received the tickets from his “wife’s friend.” However, when contacted by the OIG, Gosling could not remember Shulkin’s wife’s name, according to the report.

In response to the OIG report, Shulkin said it “does not appear accurate or objective, and it contains the thread of bias.”

“Despite going through proper channels and seeking independent approvals, providing transparent accounting of my travel, and fully cooperating with your investigation, you have treated the staff of the Veterans Administration, my wife, and my friends with extreme contempt, bordering on badgering and harassment,” he wrote. “Your staff’s conduct related to this investigation reeks of an agenda. Your portrayal of this trip is overall and entirely inaccurate.”