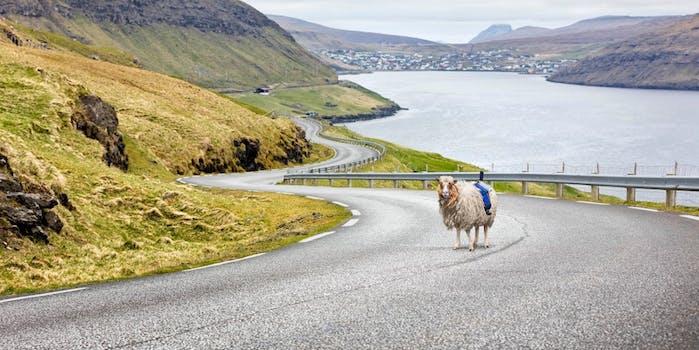 Photo via The Faroe Islands

Faroe islanders are taking mapping their homeland into their own hands—or, in this case, hooves.

Google Street View has yet to map the Faroe Islands, an 18-island archipelago in the north Atlantic, part of the Kingdom of Denmark. To promote tourism and to convince Google to map its picturesque streets, the tourism organization Visit Faroe Islands launched Sheep View 360, an unconventional method for documenting its landscape.

Durita Dahl Andreassen of the visitors bureau and her team placed the cameras on top of sheep using harnesses attached to a solar panel that powers the camera, extra battery pack, and a phone that uploads video automatically to let the group collect the street view shots.

So far, there are five sheep wandering the Faroe Islands with these modified harnesses capturing their environment via video and GPS tracking. As the sheep move around, Visit Faroe Islands can collect visuals and data about the small archipelago home to 80,000 sheep and less than 50,000 humans, according to the Guardian.

Additionally, Andreassen launched a campaign to convince Google to come to the 540 square mile group of islands and map them professionally. She’s currently uploading all the footage she captures from the backs of sheep to the service herself. Google provides a step-by-step guide for publishing your own Street View images and video, along with a list of compatible gear.

The campaign that’s using the hashtag #wewantgooglestreetview has tried to capture the tech giant’s attention for almost a year, and has yet to gain much traction.

As the sheep continue grazing and wandering among the hillsides, the cameras are capturing the natural beauty of some of the world’s most stunning landscapes. And you can see what the sheep do.