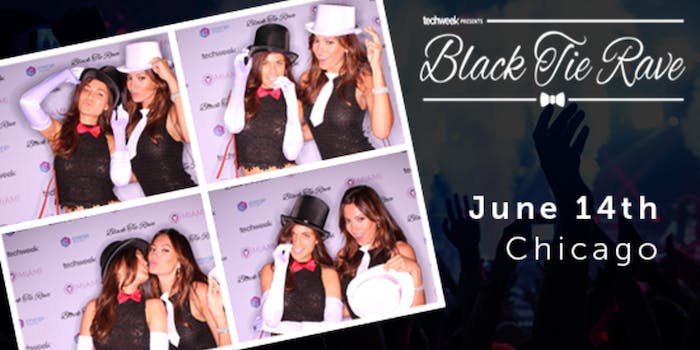 Hey, TechWeek organizers: If you want to use women to advertise your parties, maybe let them keep their clothes on next time.

The past few months have seen an ongoing discussion about sexism in Silicon Valley, and how rampant gender discrimination prevents women from joining the tech workforce. Yet the tide seems to be rapidly turning, if the actions of a handful of Chicago tech leaders are any indication: Industry leaders are speaking out against Chicago TechWeek over an advertising campaign they deem offensive and demeaning to women.

Paul Lee, a leading partner in the venture capital firm Lightbank, expressed his distaste for the ad campaign on Twitter, asking to be taken off TechWeek’s prestigious Tech100 list:

Hey @techweekchi, you can take me off your tech 100 list if this is what you stand for. #YesAllWomen pic.twitter.com/zBmiELw5EG

Other men and women in the tech industry quickly followed suit, prompting Crain’s Chicago Business to withdraw from its partnership with TechWeek:

.@TechweekCHI Being listed next to people I truly admire is awesome. But I have to ask to be removed. http://t.co/kmGEDgkgh3 #YesAllWomen

Hey @techweekchi, you can take me off your tech 100 list if this is what you stand for. #YesAllWomen pic.twitter.com/H6gJ7WJ554

I would also like to be removed from the @techweekchi 100 list. Thanks to @iPaulLee for the inspiration.

Why yes we women like nothing better than to dress up in a tuxedo swim suit to live a techbro fantasy @TechweekCHI https://t.co/kWPYnDwybX

. @TechweekCHI is knowingly using sexist ads because they think press over a controversy is worth actively perpetuating sexism in tech.

While the furor over the fliers might seem a bit blown out of proportion on the surface, this is not the first time TechWeek has landed in hot water over using sexist imagery as a promotional tool. Last year, the organizers of TechWeek posted a photo of women in bikinis on the event’s Instagram page.

Although TechWeek organizers quickly removed the photo from Instagram and issued an apology, the uproar over the fliers indicates that they failed to learn their lesson. Now, the organizers have issued a lukewarm apology for the images on their website:

The last thing we want to do is alienate anyone in the community and we sincerely apologize [emphasis included] if this event or imagery is offensive to you. The photo in question was… used with the intent to promote and encourage attendance at the inaugural event here in Chicago. The goal was not to offend or upset, but we understand and recognize the criticism that the photo was poorly selected. We take full responsibility.

TechWeek Chicago will also be holding a roundtable discussion with community tech leaders to discuss the controversy over the fliers, as well as the general issue of sexism in tech. But even if TechWeek genuinely wants to encourage a dialogue and make amends with women in the tech community, it seems that apologies are falling on deaf ears:

@TechweekCHI Its no wonder us women are hesitant to get into or stay in tech.