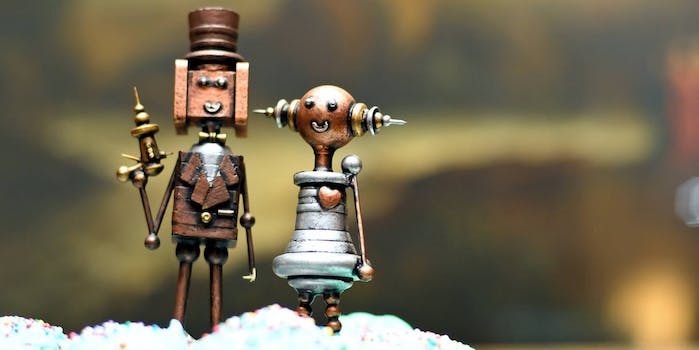 Human-robot marriage could be legal by 2050, experts say

But don't get those marriage certificates drafted just yet.

It might just be another 35 years before you and your android boo can say “I do.”

According to robotics and machine experts, humans-robot marriages may very well be legalized by the year 2050.

Adrian Cheok, director of the Mixed Reality Lab in Singapore who spoke at the “Love and Sex with Robots” conference in London last week, said that human-robot institutions might seem outrageous, but that the legalization of interracial and same-sex marriage shows how society has progressed over the past 50 years.

“People assume that everyone can get married, have sex, fall in love. But actually many don’t,” Cheok said. “A lot of human marriages are very unhappy… Compared to a bad marriage, a robot will be better than a human.”

Though humans are well on our way to having sex with robots by 2050, creating love between the two is a bit more complicated—the logistics depend upon developing software to make robots skilled enough at interacting with people.

While experts agree that human-robot marriage will be legislated upon by 2050, not all experts agree that marriages will be made legal—as robots become more realistic and used acceptably for sex and love, governments could either ban relationships between humans and robots or legalize them because of public pressure.

Either way, at least finding a robot life companion, legal or not, will get rid of that pesky in-law situation.