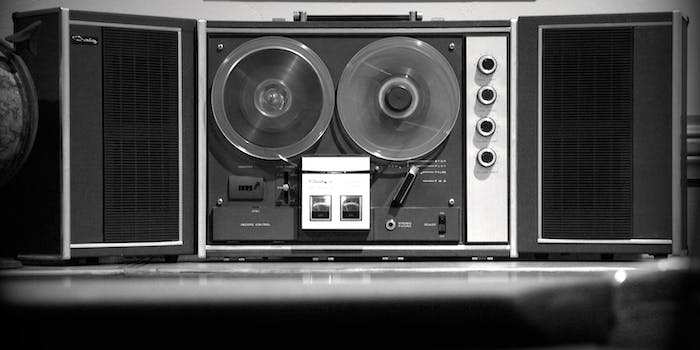 It’s not just podcasts—audiobooks are booming too

Audiobooks are still outsold by their print counterparts, but they’re no longer a niche market.

Did you hear the news? Podcasts, once a niche product, are now “booming.” Due partially to the success of Serial, the This American Life spin-off podcast reinvestigating a 1999 murder in Baltimore, the medium has now made its way into the “cultural mainstream.”

Yes, journalists have been prone to hyperbole when touting a podcast explosion, and there’s ample evidence they were already tremendously popular before the debut of Serial, but it does seem that they’ve entered our everyday conversation, and it’s not uncommon now to discuss a podcast with friends the same way you may otherwise talk about a new episode of a popular television show.

If you are a consistent listener of podcasts as I am, then you’ve likely noticed that a constant sponsor of many of the most popular shows has been Audible.com, the largest outlet for purchasing and listening to audiobooks, as well as the world’s largest producer of audiobooks. This makes total sense when you think about it. According to data from podcasting ad platform Midroll, podcast listeners are affluent and well-educated, and they’ve already made a habit of downloading audio files and listening to them during their commutes and/or free time. This is an audience primed for conversion from free audio podcasts to paid-for audiobooks.

So are audiobooks, like podcasts, seeing an explosion in growth? And if they are, is the mainstream success of podcasts helping that growth? I’ll spoil the answer to the first question: Yes. The answer to the second is more difficult to tease out.

According to a survey conducted by the Audio Publishers Association, a trade industry group, not only are we seeing a rise in the number of audiobooks published every year (35,713, more than double the previous year’s 16.039), but “net sales in dollars are up 12% over the prior year’s revenues,” bringing revenue to $1.2 billion. In 1997, the entire industry only generated$480 million. Digital downloads make up 70 percent of all podcasts sold, and the overwhelming majority of audiobook purchases, 80 percent, were of fiction titles.

Amanda D’Acierno, the publisher at Penguin Random House Audio, confirmed in a phone interview that what we’re seeing is, indeed, a huge expansion in the audiobook market. “It’s been absolutely huge growth, year after year,” she said. “Especially the past six or seven years as we’ve all become accustomed to having a smartphone in our pockets and being able to listen that way. When I joined this division 11 years ago, it was rare that I would meet people who would listen to audiobooks. It was not uncommon to meet people who never listened to audiobooks or didn’t even know what an audiobook was. I don’t think I’ve gotten that question in the last three or four years: What is an audiobook?’”

The audiobook industry emerged in the 1950s, first with LPs and then graduating to cassette tapes and later CDs. For a long time it was very much an ancillary, small portion of the overall book market. Because of the high costs of producing audiobooks and the requirement of multiples tapes or CDs, they’ve historically been much more expensive than hardbacks and were primarily sold to libraries, where it was more practical for consumers to borrow them. Also, because of the limited capacity of cassettes and CDs, listening to an audiobook could sometimes be a clunky experience. If you were listening to a CD in your car and then wanted to pick up where you left off in your kitchen, you’d have to awkwardly fast forward through a chapter until you found your place again.

The audiobook industry emerged in the 1950s, first with LPs and then graduating to cassette tapes and later CDs.

So why is there so much growing interest in audiobooks? “The iPod did amazing things for the audio business,” said D’Acierno. Not only did it expand the market of portable listening devices, but companies like Audible, no longer bogged down with the expensive production of multiple CDs, drove down the prices so they’re much more affordable. As for the role podcasts play?

“Serial is certainly capturing so many listeners right now, and it definitely helps with awareness,” she said. “Audible is very, very smart to promote their services on podcasts, because once you as a consumer become aware of the spoken word and how easy it is to download and how much of a pleasure listening to a story makes your commute every day, then we definitely have our converts.”

“Serial is certainly capturing so many listeners right now, and it definitely helps with awareness.”

Matthew Thornton, Audible’s senior director of communications, had a reverse thesis for the chicken-or-egg scenario—that podcasts were influenced, in part, by the rising popularity of audiobooks. “Audible was doing podcasts before podcasts,”  he wrote to me in an email. He pointed to original programming in the early aughts with Robin Williams, Ricky Gervais’s podcast as a paid product, Susie Bright’s weekly show, as well as recurring New York Times, Wall Street Journal, and other magazine and radio content. In a follow-up phone interview, he explained how Audible has been expanding the market for audio listening on your phone, in many ways paving the way for the success of podcasts like Serial.

“Serial has been huge,” he said. “I would assume that it’s brought some people who were not listening to content before to [regularly downloading audio], but we’ve been experiencing this kind of growth for years.”

What seems apparent is that audiobook listeners, once they’re converted to the medium, become fervent consumers of content. The average Audible customer downloads more than 17 titles per year; the average American reads 12 books per year. The overwhelming majority of Audible listeners take part in its subscription offering. On its lowest-tier plan, users pay $14.95 per month for 12 “credits” a year (a credit is usually equal to one audiobook download). And because Audible is now owned by Amazon, it was able to launch Whispersync for Voice, a technology that keeps your place across formats and devices so if you purchase a Kindle book and the corresponding Audible audiobook, you can switch back and forth between reading and listening and never lose your place. If you’re reading on your couch and then leave to drive to the grocery store, the audiobook version picks up where you left off in the ebook.

Audiobooks have become so popular, in fact, that Audible has begun to commission original works—audiobooks that don’t have print counterparts. As detailed recently in the New York Times, the bestselling crime writer Jeffery Deaver wrote an audio drama specifically for Audible.

Audiobooks have become so popular, in fact, that Audible has begun to commission original works.

“You have this massive opportunity when you don’t have to fight for people’s eyes,” Audible chief executive Donald Katz told the Times. “It’s time for us to move from sourcing content that can produce fantastic audio, on to imagining what the aesthetic of this new medium should be from the ground up.”

It’s not difficult to imagine those same words coming out of the mouth of someone at This American Life or a producer from one of the dozens of other high-quality podcasts currently running. It seems that asking whether podcasting caused a boom in audiobook sales or vice versa is perhaps the wrong way of looking at it. Maybe instead we should ask whether the two forms are merging, and when we’ll see one medium cross over into the other.

After all, what is Serial but a 12-chapter nonfiction crime book? Perhaps it’s time for Serial host Sarah Koenig to start shopping for a literary agent.