Snapchat now allows you to play tennis like Serena Williams

Wayne Gretzky,  Ken Griffey, Jr., and Joe Montana, some of the best athletes of our time, have been immortalized with their own video games. Thanks to Snapchat and Gatorade, Serena Williams has now joined their ranks.

Serena Williams’ Match Point is the first multi-level game to appear on Snapchat, and it honors the still-building legacy of tennis’s biggest star.

The game puts players in control of the legend and tasks them with winning the final point of the match to earn Williams one of her 22 career Grand Slam singles titles. Each level of the game represents another challenge in the 8-bit update to Pong that puts a surprising amount of detail capturing Williams’s signature styles in each level. 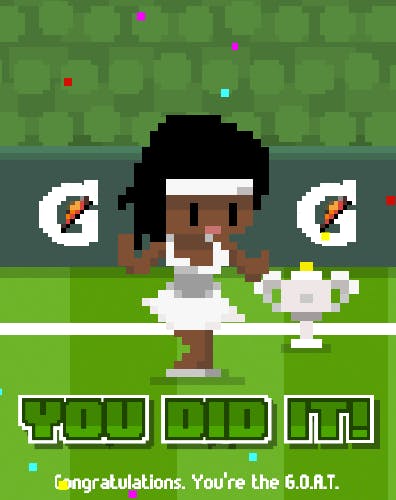 The game is about as simple as one could imagine, requiring users to just tap on either side of the screen to send the ball blazing into the opponent’s side of the court—timing the hit, of course, because there are few video game experiences more deflating than whiffing a return volley.

The game, available both on Snapchat and online, will be updated with a 23rd level if Williams manages to take home another Major victory during this year’s U.S. Open. Another title would make her the winningest player of the Open Era and put her just one win behind Margaret Court in all-time Majors won.