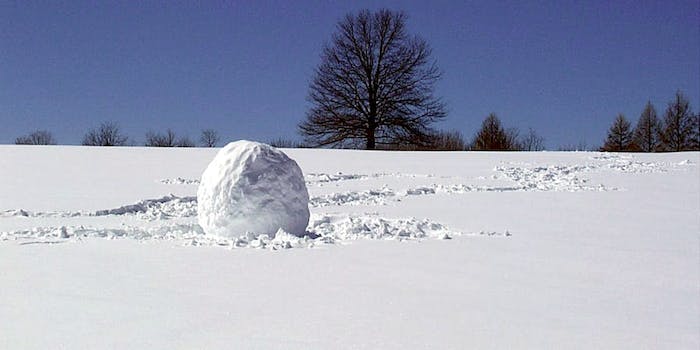 Senator ‘disproves’ global warming by bringing a snowball to the floor

This is a creative argument.

Do you want to build a straw man?

That might have been what the staff of Sen. James Inhofe (R-Okla.) asked him as he prepared to give a speech about climate change on the Senate floor.

Inhofe is the chair of the Senate Environment and Public Works Committee, but he also denies the scientific consensus that humans are contributing significantly to unprecedented global warming. To help illustrate his argument that scientists and the liberal mainstream media were lying about climate change, Inhofe stepped to the podium, reached into his bag, and pulled out a snowball.

Sen. Inhofe threw the snowball to Sen. Bill Cassidy (R-La.), who was presiding over the Senate from the chamber’s central dais. An aide to Sen. Inhofe confirmed to National Journal that one of the Senate pages—who typically sit at the foot of the dais—caught the prop.

The snowball was “just from outside here, so it’s very, very cold out,” Inhofe said. “We hear the perpetual headline that 2014 has been the warmest year on record, but now the script has flipped.”

In fact, 2014 was the hottest year on record, and literature reviews consistently show that scientists—especially climate scientists—agree that man-made global warming is real.

To Sen. Inhofe, however, the opinion of the scientific community is snow big deal.