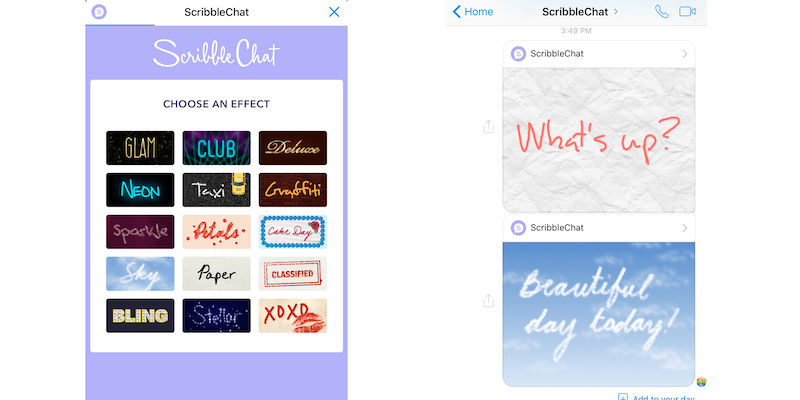 It's one of the first group messaging bots for Messenger.

Last year at Facebook‘s F8 developer conference, Mark Zuckerberg decreed that bots would be the future of Facebook Messenger. With a bot, you could chat with a brand’s customer service department, order food, or get information from your favorite news sources, all without leaving Messenger. Today, there are more than 30,000 bots for Facebook Messenger. The link between all of these experiences, though, was that it was personal—just between you and the bot you’re chatting with.

This year, Facebook is making the bot experience social by expanding it to group chats.

One app using that new capability—called Chat Extensions—is named ScribbleChat. ScribbleChat (already available as a standalone iOS and Android app) is a custom 3D handwriting bot that lets you send personalized messages to friends. Using the bot, you can write out a message with your finger on-screen, rather than typing it out. Then you can customize it. If you don’t like your handwriting, you can translate it to a different font or handwriting style. You can choose the color and background design, as well. On top of that, you can add emoji or on-screen animations to the message.

You can then tack it onto your Facebook Day stream, or just share it with one or more friends in a Messenger chat thread. Your friends don’t need to download ScribbleChat in order to view your custom messages, but would need to download the bot to send their own creations back to you.

You can download ScribbleChat for Facebook Messenger effective today. It’s available on any platform that Messenger is already available on, which includes Android, iOS, and on the desktop.