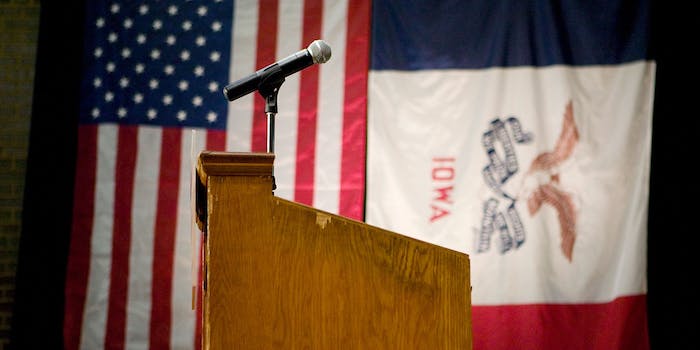 It's getting really crowded.

Scott Walker, the Republican governor of Wisconsin, just became the latest Republican to announce that he’s officially running for president—a group that seems to get more crowded by the week.

The self-described “principled conservative” has been expected to jump into the race for years, and many politicos anticipate a strong showing thanks to his extensive experience on the national stage.

“I’m in. I’m running for president because Americans deserve a leader who will fight and win for them,” Walker tweeted on Monday morning. He’s holding a live event in Wisconsin on Monday evening to make the formal announcement.

No stranger to the spotlight, Walker has been the focus of national media attention for almost half a decade because of his fights with labor unions and a high-drama 2012 recall vote that was the main attraction on every cable news show for six months straight. He then went on to win re-election in 2014 by 6 percent.

Walker is already leading in several polls of early primary states, including an Iowa Republican Presidential Caucus poll from just last week. He’s far weaker in New Hampshire, however, and most other states.

It's here. It's out. Introducing, the official campaign logo. RT if you're excited for Scott Walker! #Walker16 -STAFF pic.twitter.com/OcPvmAI2Qh

Walker is topping Republican rivals such as former Florida Gov. Jeb Bush and Sen. Rand Paul (R-Ky.) in early polls. He is even beating Democratic frontrunner and former Secretary of State Hillary Clinton by four points in at least one early North Carolina poll—though Clinton is beating Walker by as much as double digits in scores of other polls.

On the PredictIt prediction market, where users bet money on political events and which has a history of being more accurate that polls, Walker is running second in the Republican race to Jeb Bush.

Photo via StumpSource (Used with permission)