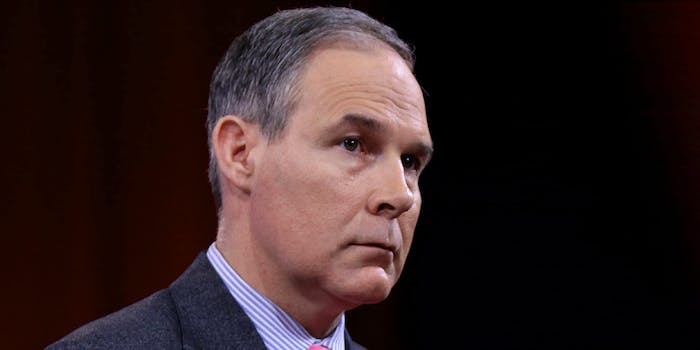 Documents obtained by the New York Times through a Freedom of Information Act request show that Pruitt had dinner with the Cardinal while on a trip to Italy last year. That trip has already come under scrutiny for its exorbitant cost at taxpayers’ expense.

Internal EPA communications show that staff began planning the dinner with Pell, which took place at a five-star restaurant, back in May of 2017. However, publicly available EPA schedules don’t include any mention of Pell, who was under investigation for sexual abuse at the time.

EPA employees knew that Pell was under investigation prior to the trip, but planned the dinner anyway. Pell also offered to give Pruitt a tour of the Vatican Apostolic Palace. Pruitt took the tour, but was not accompanied by Pell. Pell was formally charged on June 29, 2017, almost three weeks after the dinner took place.

The meeting was intended to set up a two-sided debate on climate change, according to the Guardian, which Pruitt has said is one of his priorities for 2018. According to the documents released by the Times, Pell and Pruitt discussed a Wall Street Journal article by theoretical physicist Steven Koonin, which advocates a “red team/blue team” approach to climate science debate.

Pell is currently on trial in Australia on multiple sexual abuse charges. He is the most senior Vatican official so far to be implicated in the ongoing abuse scandal in the Catholic Church.

Pell has also spoken at the Global Warming Policy Foundation, a U.K.-based climate change denial group. In his 2011 address to the group, he defended CO2 emissions as “the stuff of life,” saying that orchards and farms were more productive because of increased CO2 in the atmosphere.

Before heading the EPA, Pruitt was the Attorney General of Oklahoma, and sued the agency 14 times. He has stated that he does not see human activity as the primary driver of global climate change and has vowed to roll back President Obama’s Clean Power Plan, which was intended to reduce carbon emissions from power plants.

Pruitt’s tenure has been marked by potential ethics violations, from spending hundreds of thousands of taxpayer dollars on first-class travel, to excessive security spending. Pruitt also gave significant raises to favored EPA employees against the wishes of the White House, and maintains close ties to lobbyists and other industry insiders.