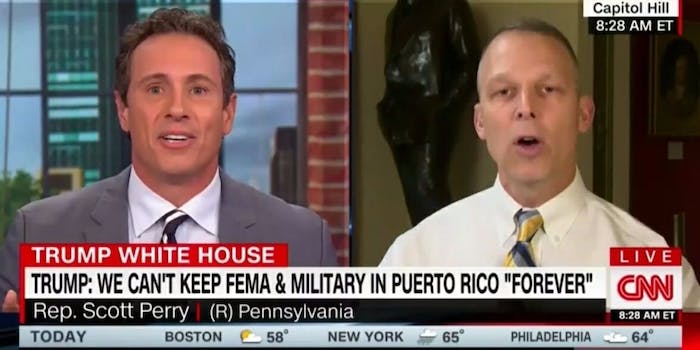 He said the federal government's response has been a success.

Despite daily reminders that the vast majority of people in Puerto Rico are still struggling to find electricity and a third remains without access to clean water in the wake of Hurricane Maria, President Donald Trump continues to find ways to shame the island. Now, members of Congress are jumping in to help out.

On Thursday, Rep. Scott Perry (R-Pa.) signaled his agreement with Trump, downplaying the devastation in Puerto Rico and saying CNN was lying about how many people in the U.S. territory were actually without power and water.

“If half the [island] didn’t have food or water, those people would be dying,” Perry said. “And they’re not.”

As of Thursday afternoon, the Puerto Rican government said more than 80 percent of the island didn’t have power and 36 percent of residents did not have running water. At least 45 people have died as a result of Hurricane Maria.

“It’s horrible, it’s horrible. It’s a nightmare,” one resident told CBS News. “… There’s barely any drinking water, not even in supermarkets. My fear is for my kids.”

This is what Trump tweeted Thursday morning.

"Puerto Rico survived the Hurricanes, now a financial crisis looms largely of their own making." says Sharyl Attkisson. A total lack of…..

…accountability say the Governor. Electric and all infrastructure was disaster before hurricanes. Congress to decide how much to spend….

Perry—who previously made news by saying he didn’t think maternity care should be covered by health insurance because his wife won’t be having any more children—also told CNN that the federal government’s response to Hurricane Maria was a “success story.”