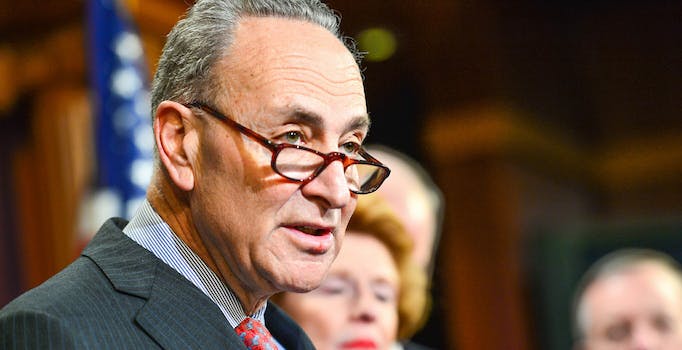 The idea is taking hold among some Democratic lawmakers.

Senate Minority Leader Chuck Schumer (D-N.Y.) has joined a growing number of Democratic lawmakers who have said they would support an effort to block the nomination of any new FBI director until an independent prosecutor is named to investigate the Trump campaign’s ties to Russia.

Several Democrats have spoken about the potential blockage in the wake of President Donald Trump’s surprise decision to fire FBI Director James Comey while the agency is in the midst of investigating the possibility of collusion between Russia and the president’s campaign for president last year.

“I think there are a lot of Democrats who feel that way,” Schumer told CNN’s Jake Tapper. “We will have to discuss it as a caucus, but I would support that move, because who the FBI director is, is related to who the special prosecutor is.”

Schumer went on to point out that in order to block any potential pick Trump makes for a new head of the FBI, the Democrats would need to be completely united and still find some Republican senators to vote against the nominee.

“The key here, of course, is getting some of our Republican colleagues to join us,” Schumer said. “We’re hoping, we’re waiting, we understand it’s difficult, but I think patriotism and the needs of this country demand it.”

With Sunday’s comments, Schumer joined a growing number of Democratic lawmakers who have floated the possibility blocking Trump’s FBI nomination until a special prosecutor is named to look into Russian collusion in the 2016 election.

Sen. Kirsten Gillibrand (D-N.Y.) tweeted her support of a plan to block the nominee last week.

The Senate shouldn't consider a new FBI Director until an independent special prosecutor is appointed to probe the Trump campaign & Russia.

Sen. Mark Warner (D-V.A.), the Senate Intelligence Committee vice chairman, and Sen. Heidi Heitkamp (D-N.D.) both recently told Politico that they believe any FBI confirmation should be put on hold.

“I think that we ought to frankly hold off on the FBI director until we get the special prosecutor,” Warner said.

Many American’s want to see a special prosecutor named to investigate any Trump campaign ties with Russia. A Change.org petition demanding a special prosecutor be named for the probe has more than 78,000 signatures as of Monday morning. The petition’s organizer said they would deliver it  Senate Majority Leader Mitch McConnell (R-Ky.) and Schumer.

An NBC/Wall Street Journal poll released on Sunday found that 78 percent of Americans want an independent investigation into Russia.