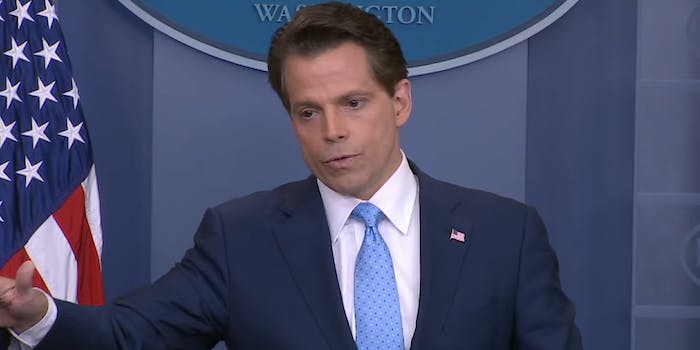 Specifically, Scaramucci―who lasted just 10 days in the administration before being dismissed―told ABC News’ George Stephanopoulos that Trump’s statement following the news that someone slammed a car into a crowd of anti-racist protesters “needed to be much harsher,” and reeked of Bannon’s influence.

“You also got this sort of Bannon-bart influence in there, which I think is a snag on the president,” Scaramucci told Stephanopoulos. “If the president really wants to execute that legislative agenda that I think is so promising for the American people, the lower-middle class people, and the middle class people, then he has to move away from that sort of Bannon-bart nonsense.”

It’s not particularly surprising to hear Scaramucci take a shot at Bannon. The former Wall Street financier was embroiled in a serious controversy during the infancy of his White House tenure thanks to an obscenity-laced phone call he placed to Ryan Lizza of the New Yorker, in which he criticized Bannon in particularly vulgar terms.

“I’m not Steve Bannon,” Scaramucci remarked. “I’m not trying to suck my own cock.”

Scaramucci told Stephanopoulos that Trump should’ve released a statement more explicitly and specifically condemning white supremacists. In the aftermath of the Charlottesville protests and attack, Trump delivered a relatively brief statement denouncing violence and hatred “on many sides.”

“Look at the campaign he ran. Look at the intentional courting, both on the one hand all of these white supremacist, white nationalist groups like that, anti-Semitic groups, and then look on the other hand the repeated failure to step up and condemn, denounce, silence, put to bed, all of those different efforts just like we saw yesterday,” he said Sunday morning on CNN.